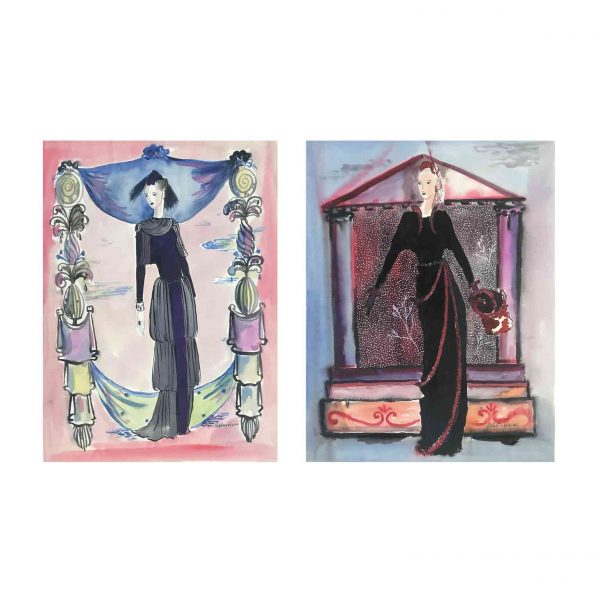 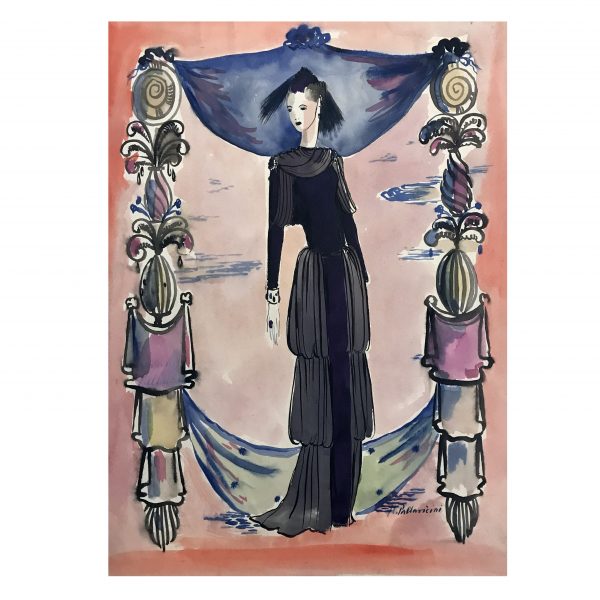 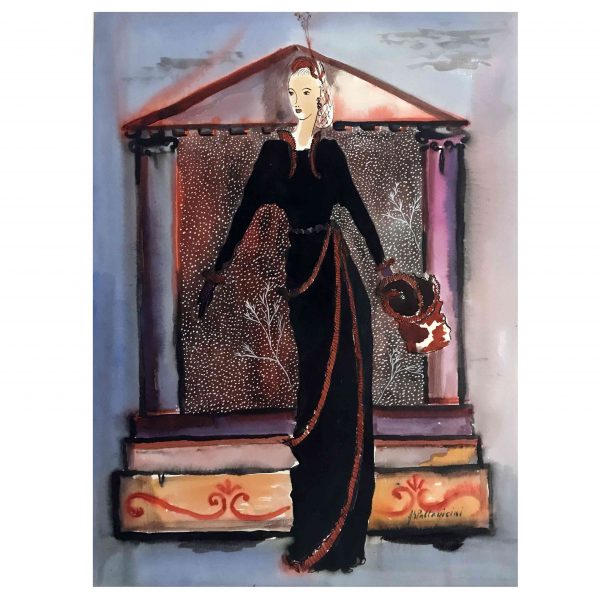 In good condition, both gouaches are unframed and each drawing measures 39 x 29 cm.
Dating back to circa 1950.

Mr. Pallavicini’s sophisticated, delicate and imaginative designs appeared on packaging and wrapping papers, porcelain and fabrics. They were also translated into stylish theater costumes and sets.

In 1950, he created Flair magazine for Fleur Cowles. The design of the short-lived magazine was unusual for techniques like unfolding pages that revealed pictures and a gatefold that revealed a cross-section of an apartment building.

He was also a stylist for Look magazine, had paintings exhibited in galleries in New York and Chicago and, in 1955, became art director of Elizabeth Arden, the cosmetics company. From 1956-1965, he was an artistic consultant and interior designer for Helena Rubinstein and decorated rooms in her apartment on Park Avenue. In 1978, Mr. Pallavicini created the sets and costumes for the Vienna State Opera’s production of ”The Young Lord.” Displays for Pastry Shop.
Born Friedrich Ludwig von Berzeviczy in 1909, in Lausanne, Switzerland, Mr. Pallavicini studied Fine arts in Vienna. In the late 20’s, the architect Josef Hoffmann introduced him to Demel, the famous pastry shop, for which Mr. Pallavicini created fanciful window displays, wrapping papers and packaging. In 1936, he married Klara, a niece of Anna Demel.
After moving to Italy in the late 30’s, Mr. Pallavicini adopted his mother’s name and pursued a career as a magazine illustrator and art director, working for publications like Bellezza, Domus, Fili and Scena Illustrata. He came to USA in the 40’s. Died in New York 1989. 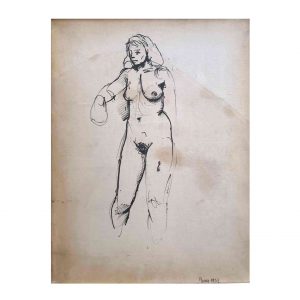 Paintings
Female Nude Ink Drawing by The Italian Painter Renato Guttuso Roma 1952
Standing female nude ink drawing, by the Italian artist Renato Guttuso (1911-1987), dated lower right Roma 1952, an original ink drawing on paper, dated lower right Roma 1952 depicting a standing nude female figure. The drawing shows an old restoration in the upper part of the item, due to a tear corresponding to the woman's hair, which has been integrated and that's why this item has been relined on canvas and framed. Set in a silvered wooden frame, under glass and within a grey masonite passe-partout, it comes from a private house of Milan, on the back of the canvas, the label of the contemporary art gallery Orazio Zamatei, active in the fifties in Milano downtown, via Santo Spirito. Renato Guttuso was an Italian artist known for his association with the Socialist Realism movement popular in the Soviet Union. Born in 1911 in Bagheria, Sicily, he gave up studying law at Palermo University to pursue a career as an artist. Having shown an aptitude for drawing at a young age, his early style reflected the influence of Giorgio de Chirico. The artist went on to exhibit two of his paintings in 1931 at the showcase, Prima Quadriennale d’Arte Nazionale de Roma. Guttuso died January 18, 1987 in Rome at the age of 75. Today, his works are held in the collections of the Hermitage Museum in St. Petersburg, the Tate Gallery in London, The Museum of Modern Art in New York, and the Palazzo Ruspoli in Rome, among others. Drawing size: 30 cm H by 23.5 cm W. Frame size: Height 51 cm Width 44 cm Depth 5 cm.
Read more