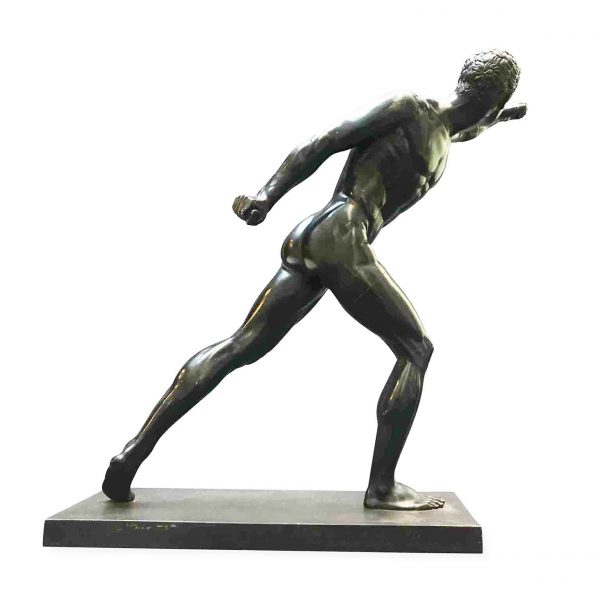 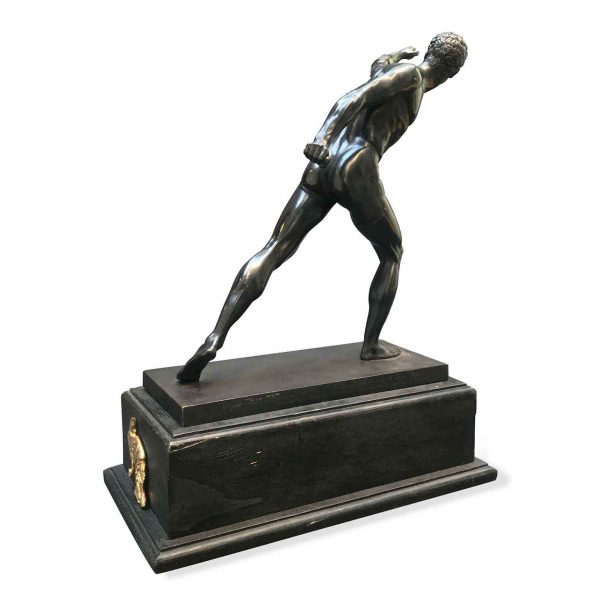 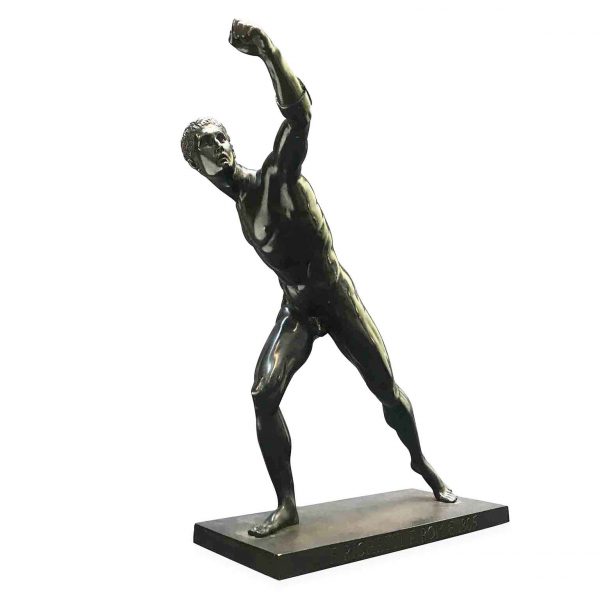 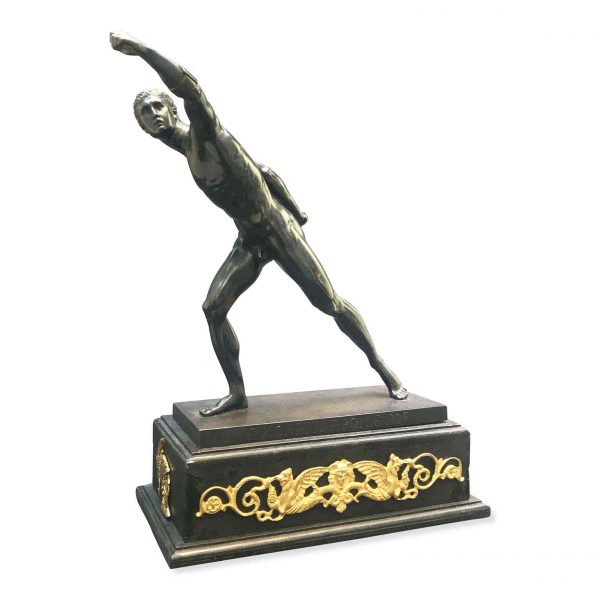 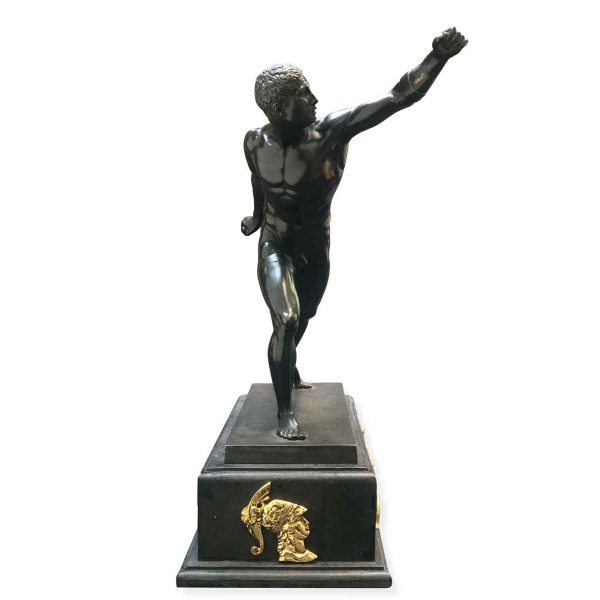 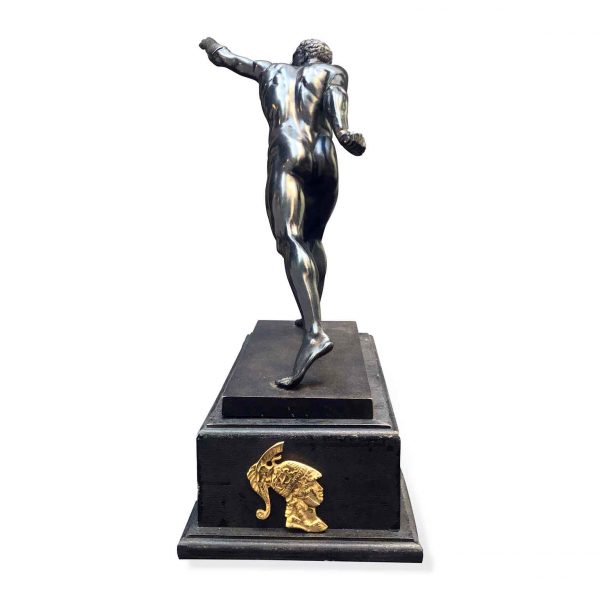 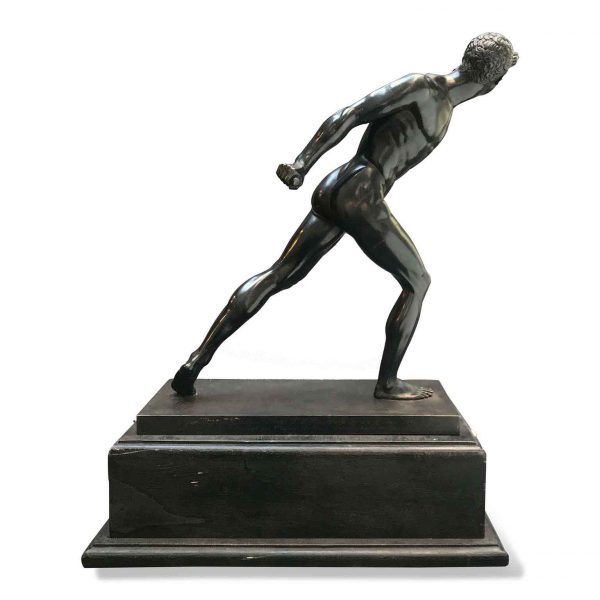 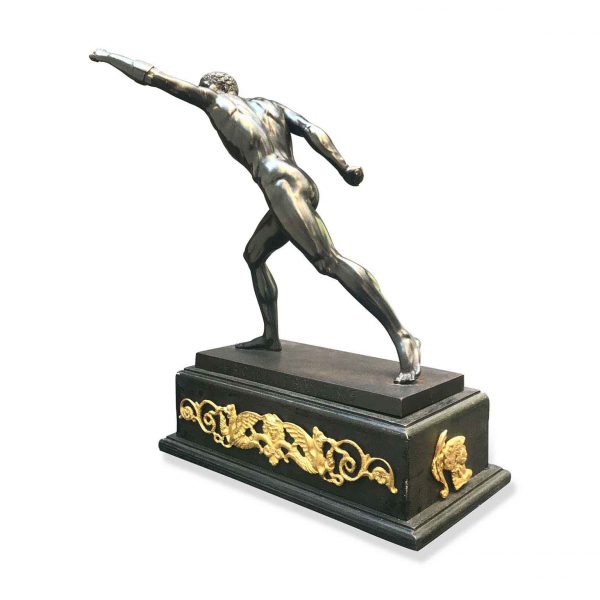 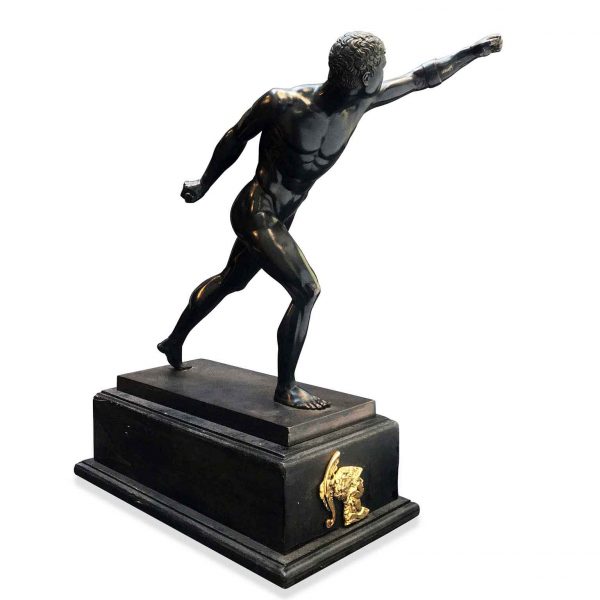 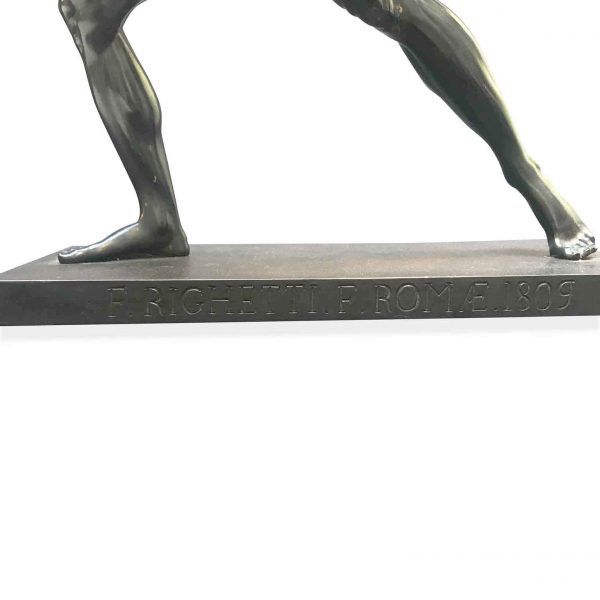 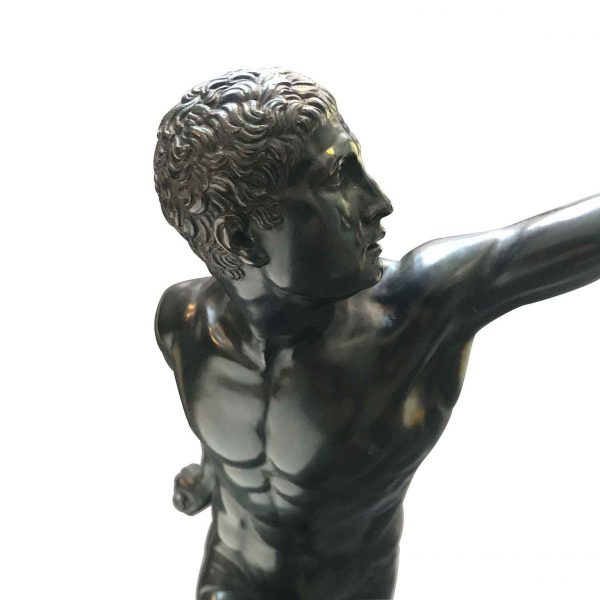 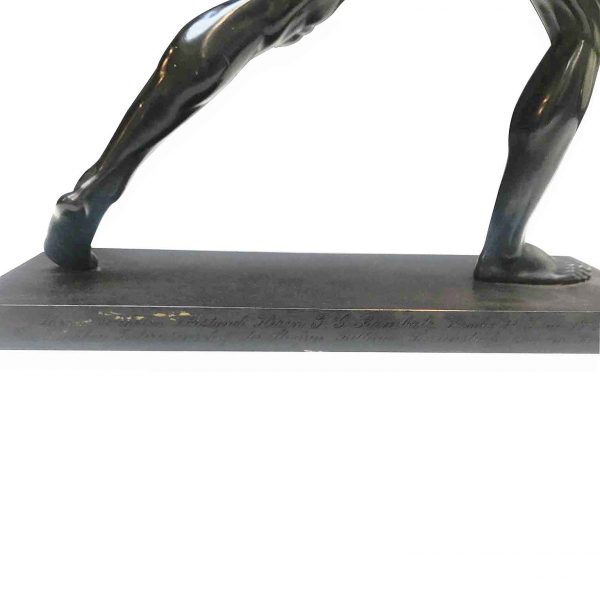 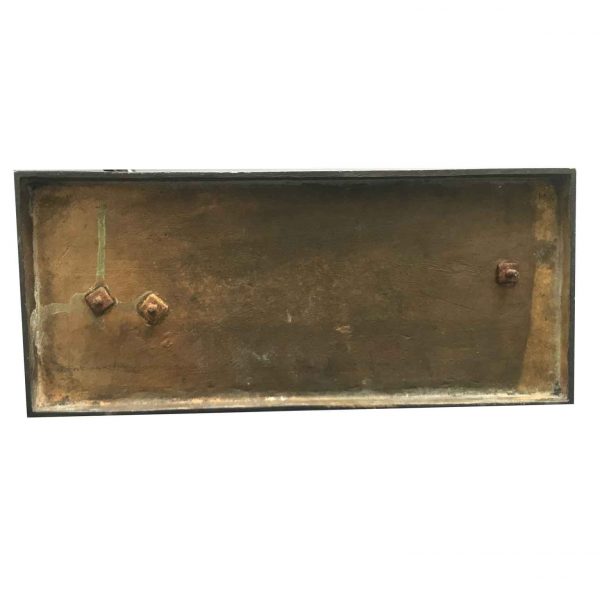 The bronze represents the famous Greek sculpture of a young fighter portrayed in the act of protecting himself from the aggression of the enemy with the shield which, originally, had to be attached in the sculpture to the left arm raised on guard.

The bronze figure with dark  patina rests on a base, which bears the signature F. RIGHETTI F.ROMAE 1809.

The original marble, now in the Louvre museum’s Greek Statuary in Paris, can be dated to the first century BC. and it was discovered near Neptune in 1611, becoming two years later one of the most valuable pieces in the collection of Cardinal Scipione Borghese,from which it took its name. Subsequently, in 1807, it was bought by Napoleone Bonaparte and placed in the Salle d’Apollon at the Musée Napoléon.

The sculpture, particularly appreciated for its timely and true anatomical rendering, caught in its extremely harmonious athletic gesture, was often reproduced in large and small scale since the 17th century.

The perfect translation into bronze of the Gladiator, anatomical perfection of the  human body, muscles exaltation and the harmony of the figure,  are peculiar characteristics of Righetti’s works.

Besides the high quality casting even captures the expression of terror on his face, as in the original model, make it one of the most important models of Neoclassical sculpture.

Signed and dated on the front pedestal, F. RIGHETTI F. ROMAE  1809, in the back of the base there is a German engraving which certifies the donation of this artwork to an official from Hamburg in 1905.

Righetti was trained in Rome, in the studio of Luigi Valadier’s (1726-1785). His bronze casts were so refined that Catherine the Great and Popes Pius VI and VII were among his patrons. In 1805, he took over from Valadier as head of the Vatican foundry.

His debut on the international scene took place in 1781 with the realization of a series of lead castings, copies of ancient masterpieces and not only, for the villa of the famous banker Henry Hope, in Welgelegen near Haarlem.

Also Righetti soon became famous for his small bronzes taken from ancient statuary, to which he copied copies taken from the masterpieces of Bernini, by Giambologna. During the French Empire, some of Rome’s most illustrious figures commissioned works from him, including Camillo Borghese and his wife Pauline Bonaparte, Napoleon’s sister.

As well as specialising in bronze statuettes, he was renowned for casting monumental sculptures for Antonio Canova, such as the Napoleon I commissioned by Eugène de Beauharnais (Palazzo Brera, Milan).

He later worked for the Court of Naples, executing, together with his son Luigi, the equestrian monuments to Charles III and Ferdinand I in front of the Royal Palace.

Righetti owned a well-known foundry in Rome, where he sold bronze reductions of celebrated Antique statues. In a few years his works were a great success, so much so that the German Alois Hirt, one of the ciceroni most requested among the German travelers to Rome, defined in 1787, Francesco Righetti and his son Luigi, the most famous bronzesmiths who fuse statues from the ancient to small in the city.

His excellent castings of classical models were popular souvenirs for the European aristocracy to bring back from their Grand Tour. He counted important princes and kings, including Pius VI and Empress Catherine II of Russia.

The sculpture is in good condition, the bronze has a unique original dark patina, slightly marked closed to the German inscription on the back of base.  At the right anterior thigh, the resting leg, a minimal inconsistency is revealed in the junction of the jet of the leg and that of the body. 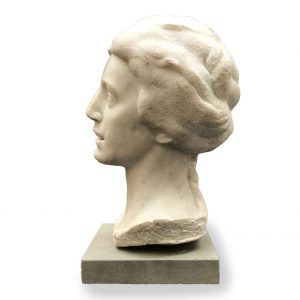 Figurative sculptures, Sculptures
20th Century Italian Smiling Girl Bust White Marble Sculpture by Bossi Aurelio
A 20th century Italian white marble bust of a smiling girl, a carved Carrara marble figural sculpture, signed on the base by the Italian artist Aurelio Bossi  1884-1948, whose sculptures are displayed at Pinacoteca di Brera in Milan, whereas at the Duomo Milan Cathedral there is his Statue of Cardinal Borromeo, while two busts adorn the facade of the chapel of the Niguarda Hospital. This antique female bust stands on a modern square grey stone basement. Aurelio Bossi (Monticelli Pavese, 20 July 1884 - Bergamo, 21 October 1948) studied at the Brera Academy in Milan and specializes in sculptures in various materials wood, marble, bronze castings. He carried out his activity in Milan mainly in the years between the two World Wars. He exhibited his works at the Venice Biennale from 1919 to 1939.
1.200,00€
Add to cart
Sold 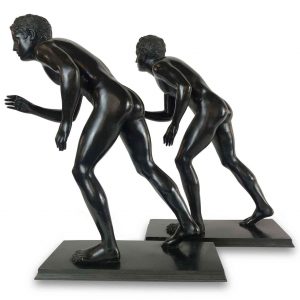 Bronze sculptures, Sculptures
Italian Grand Tour Bronze Runner Sculptures Early 20th Century
A Pair of Grand Tour cast bronze sculptures of the Herculaneum runners, modeled after the famous antique models in the Villa of the Papyri, Herculaneum, now located in Neaples Royal Museum. Standing on a rectangular base, the two figures are in good condition, with a beautiful near-black patina to the surface. They come from a Grand Tour souvenir private collection in Milan and date back to 1930 circa. The two twin bronze statues are part of the statuary of Villa of the Papyri, a luxury villa on the outskirts of the ancient Herculaneum (Ercolano), where they were found in 1754. The work portrays two nude young athletes on an irregular base in a similar and specular posture, completely similar in the facial features. The statue shows the athlete with the left leg bent forward and the sole of the foot resting on the ground, while the right leg is set back with the heel raised; the trunk is leant forward; the right arm is bent, while the left one is lowered; the head is slightly turned towards the shoulders; the hair, with short tufts ruffled on the forehead, is arranged in two opposite pincers-shaped locks, the eyes are well detailed. They are probably copies of Greek statues of the late fourth century or the early third century BC, celebrating a victorious athlete in one of the major Pan-hellenic games; they can be referred to the Augustan Age according to the context and a stylistic analysis. Measures: Height 48 cm Width 40 cm Depth 19 cm.
4.000,00€
Read more 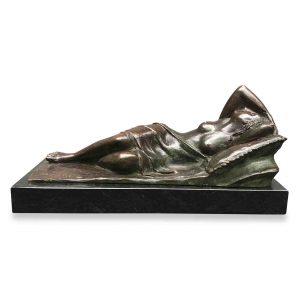 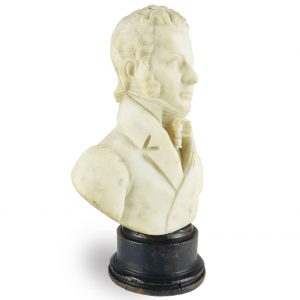 Antique Italian alabaster sculpture of a Gentleman by Odoardo  Tabacchi (Valganna 1831- Milano 1905),   a young work of the Italian artist, realized in alabaster during the mid 19th century.

The half-bust elegant dressed male figure is impeccably detailed hand-carved,  in a magical warm tone of alabaster, signed on the back coat collar Tabacchi.

This Italian antique sculpture comes from a Milanese private collection and is in good condition,  standing on a circular turned wooden basement.

Odoardo Tabacchi was an important Italian  Lombard sculptor  of the second half of 19th century Realist school, attended the Accademia di Brera in Milan. Teacher of the Accademia  Albertina di Belle Arti in Turin, He realized many significant monuments such as Cavour in Milan, Garibaldi and Frejus in Turin, Arnaldo da Brescia in Brescia and Michelangelo in Varese and attended to main Italian Expositions, as well as in Paris and Vienna.