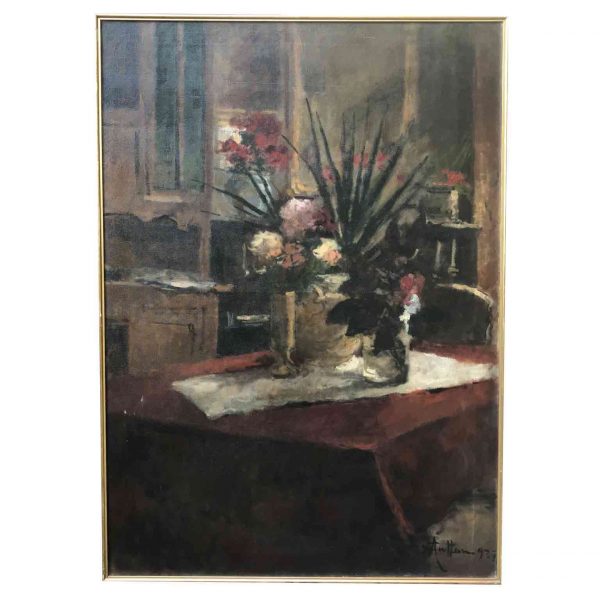 From Italy an oil painting on canvas signed and dated A.Cattaneo 927 on the lower left, by the Milanese artist Achille Cattaneo (1872-1932) depicting many flower compositions within different vases, decorating an interior dining table. The painting is in good age related condition, set within modern giltwood frame, it comes from a Milanese private collection. Bertini’s pupil at Brera was then strongly influenced by the naturalistic verism with a disappointed matrix in the schemes of the so-called Lombard impressionism by Emilio Gola. Cattaneo’s first painting was purchased by the City for the Gallery of Modern Art in Milan. He participated in numerous national and international exhibitions with paintings of interiors of churches and views of Milan, especially the canals, which he preferred. In 1950 a posthumous exhibition of this artist, classified as a good impressionist from Lombardy, sincere, fresh and effective, was held at the Galleria Ronzini in Milan. 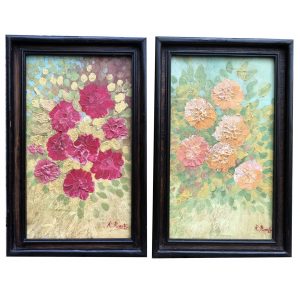 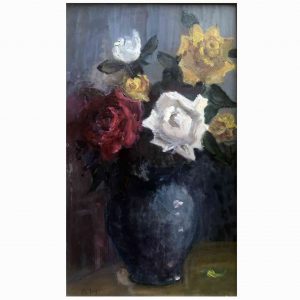 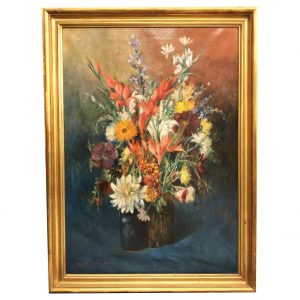 Paintings, Still life
Montini Umberto Flowers Composition
Montini Umberto, polychrome flowers composition, oil on canvas painting dating back to 1950’s circa, signed lower left U.Montini by the Milanese artist Umberto Montini (Milano 1897- Busto Arsizio 1978). The work comes from a private villa of Milan and is in good condition, within a gilt wood modern frame measuring 80 x 60 cm. This antique still life depicts a bouquet of polychrome flowers, , dalias, red lilies, within a clear glass vase placed near a blue pottery vase, blue background. This painting is made of shiny colors, it might seem a casual composition but it is wisely balanced with an inanimate blue pottery vase on the left side. Height: 80 cm - canvas 70 cm Width: 60 cm - canvas 50 cm
750,00€
Add to cart 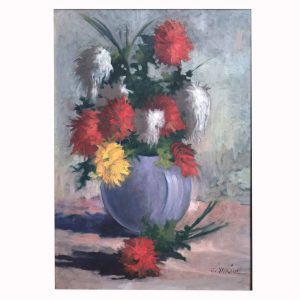