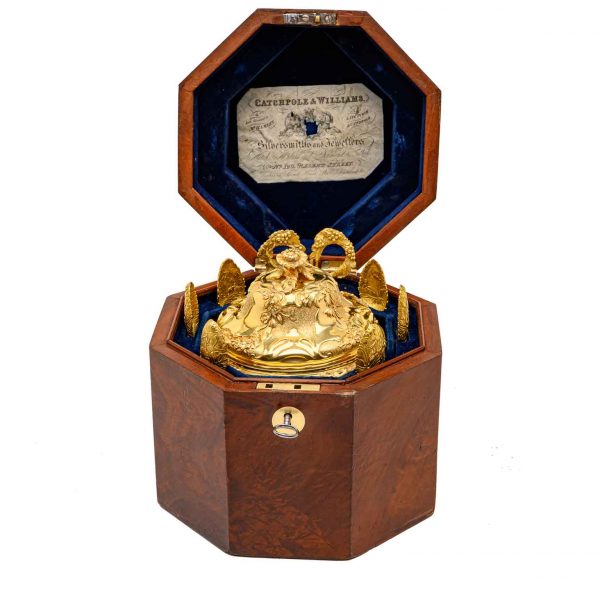 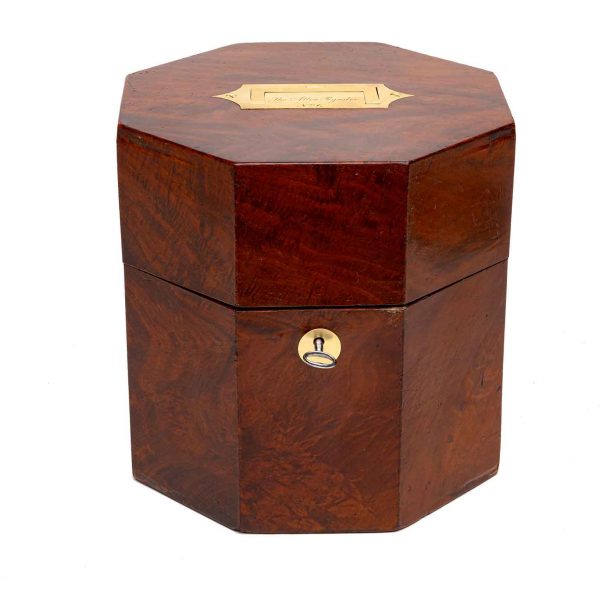 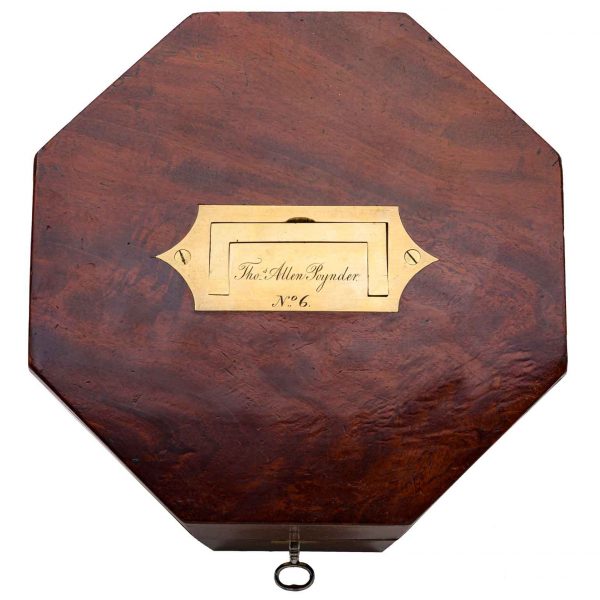 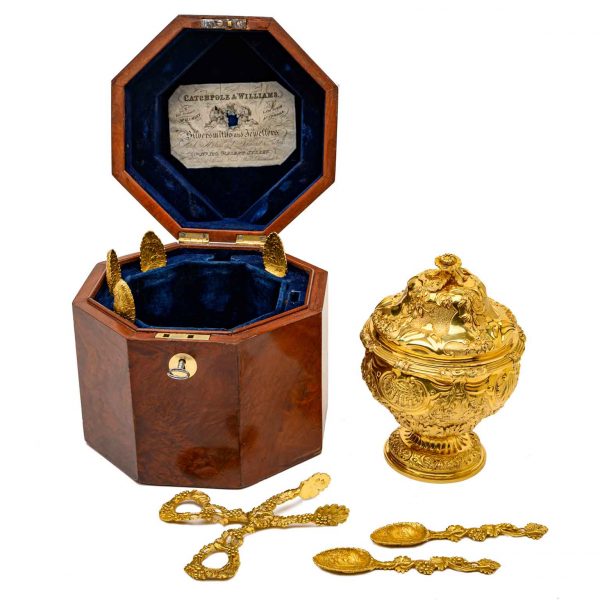 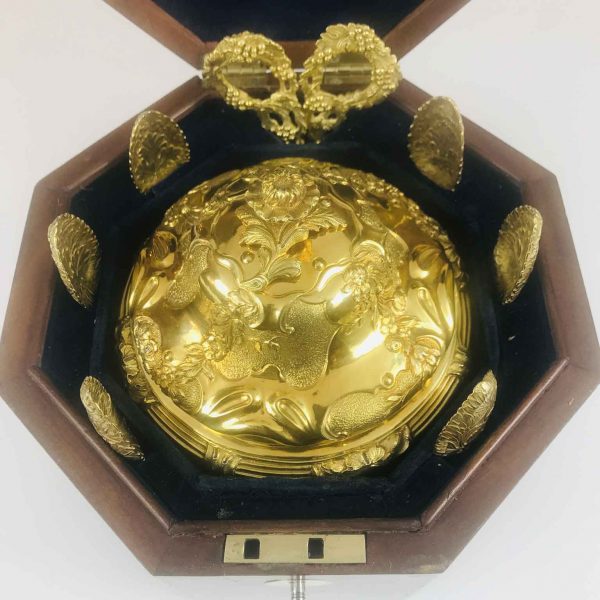 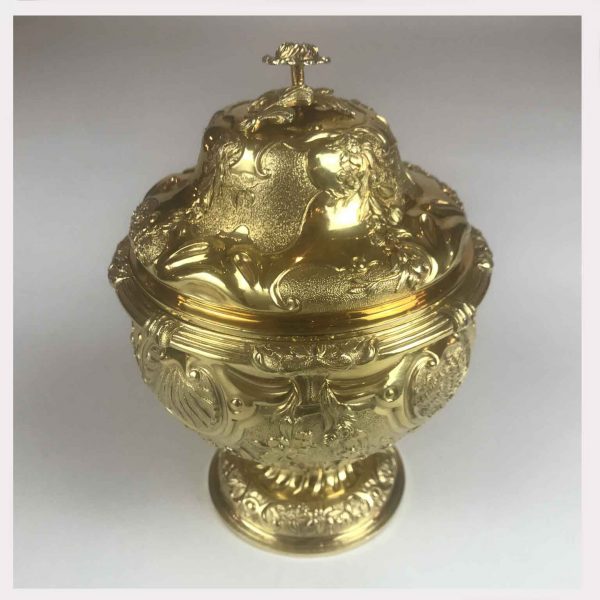 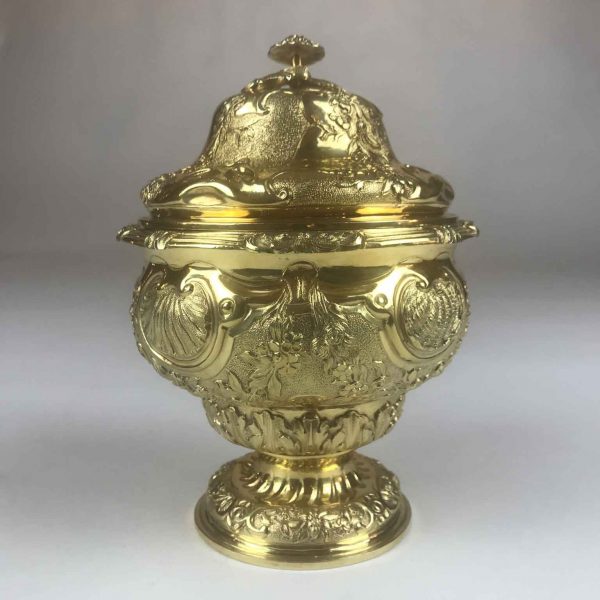 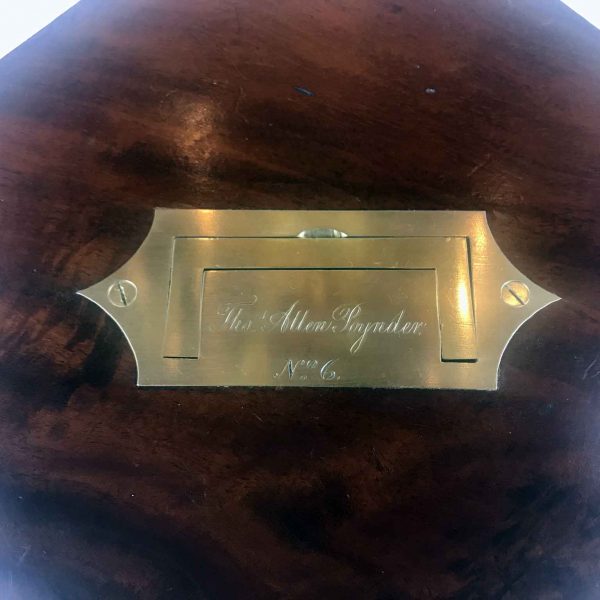 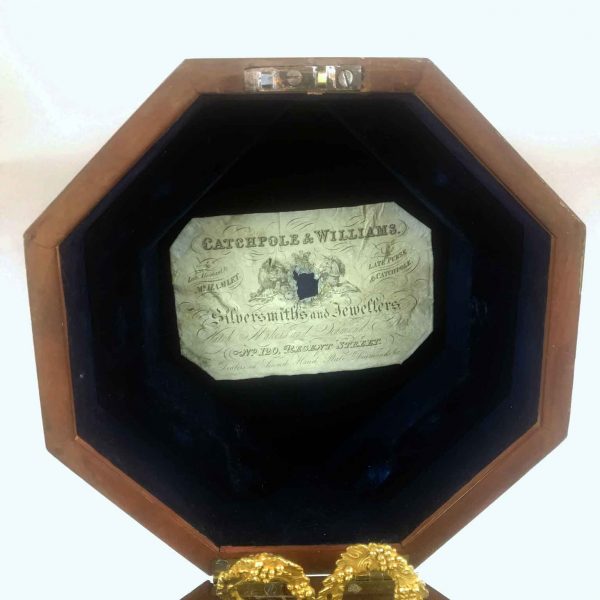 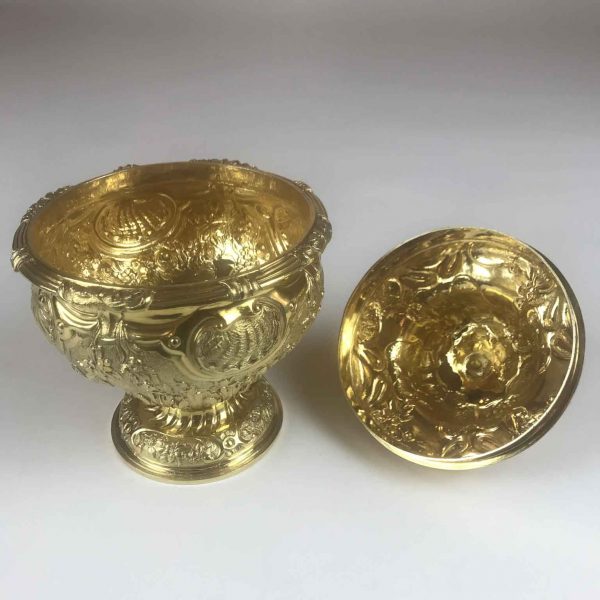 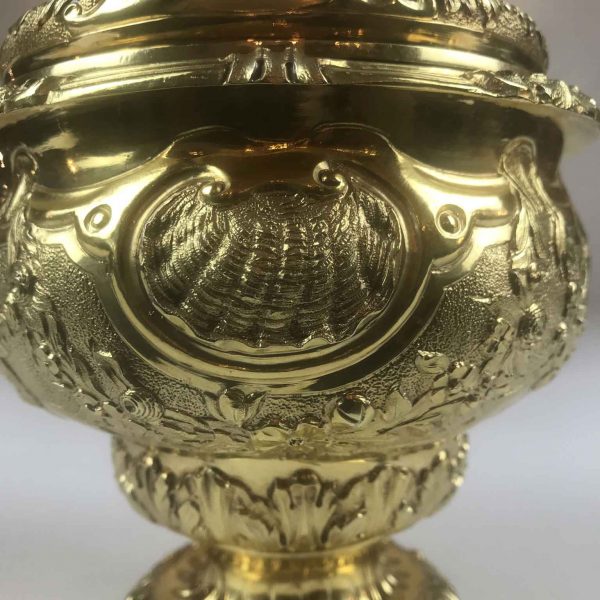 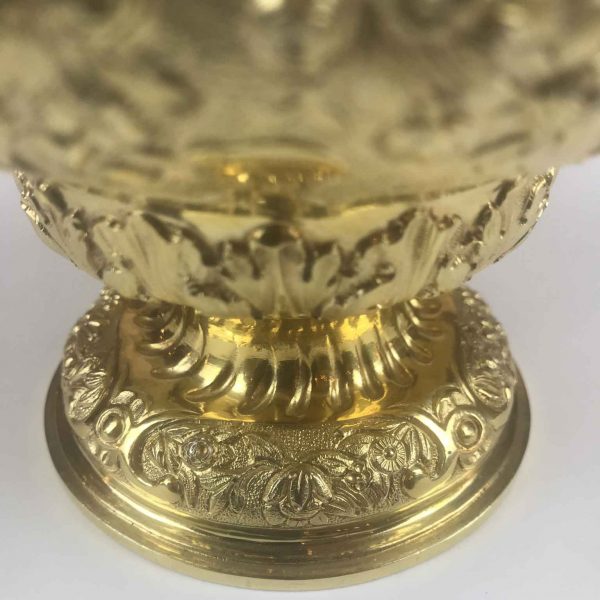 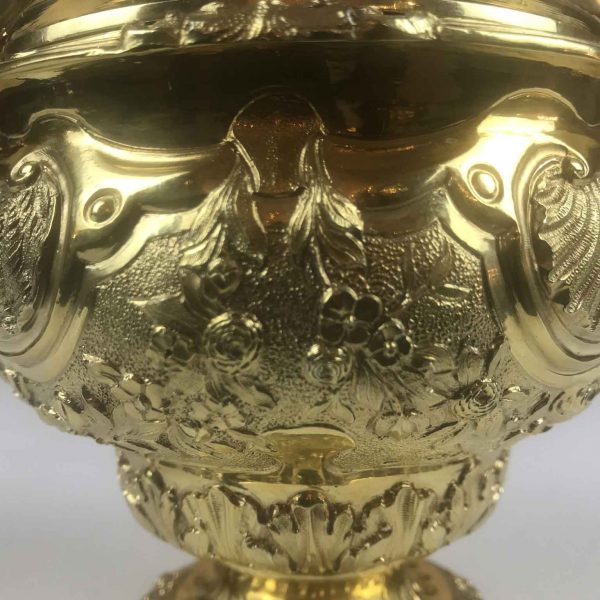 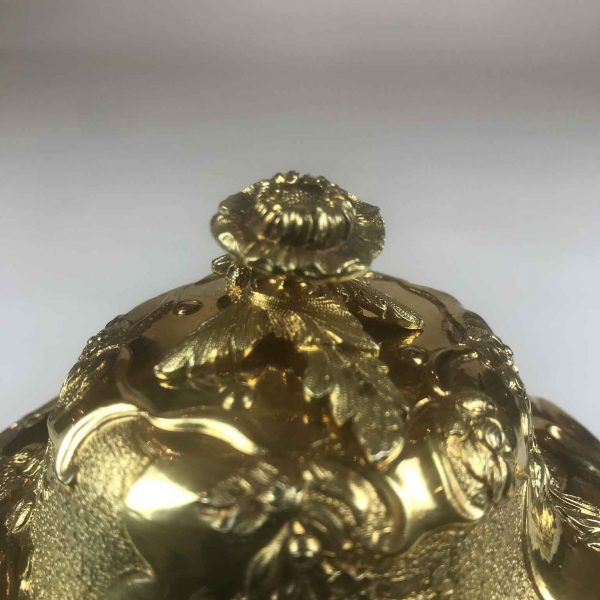 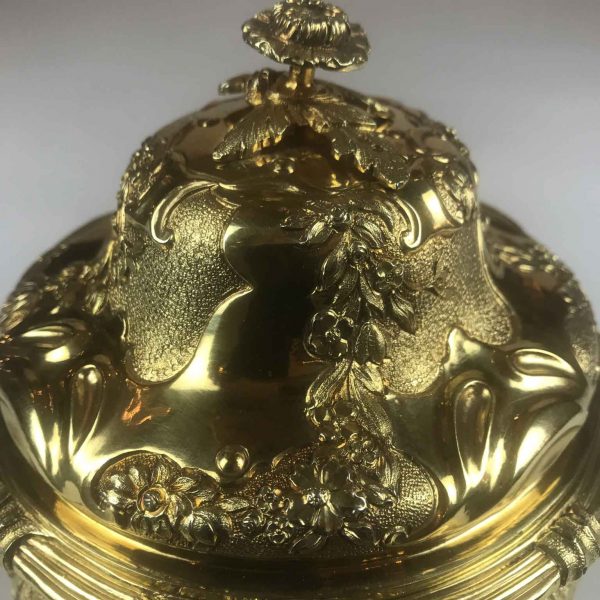 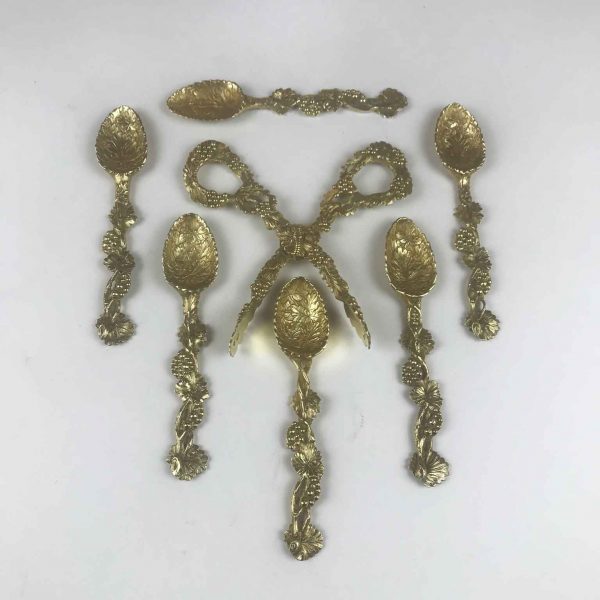 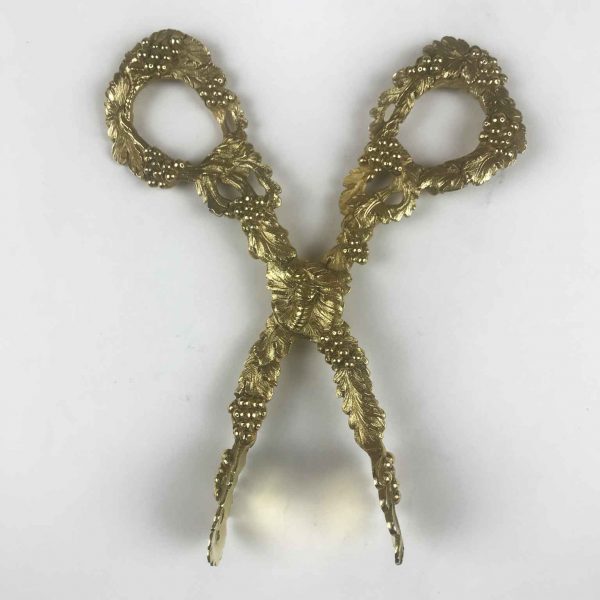 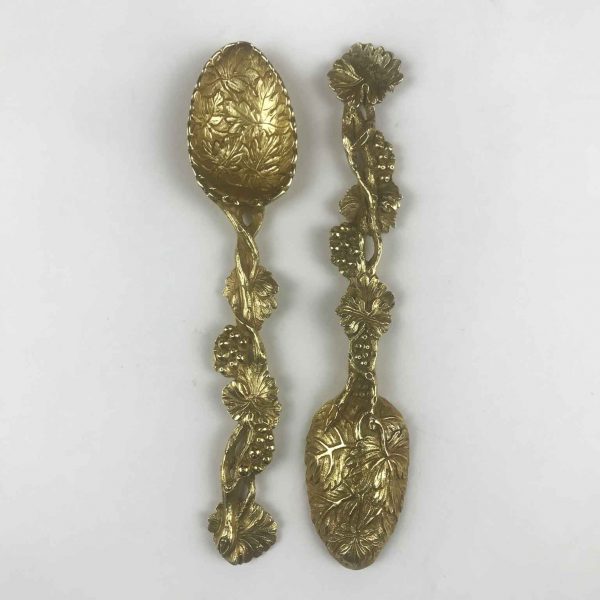 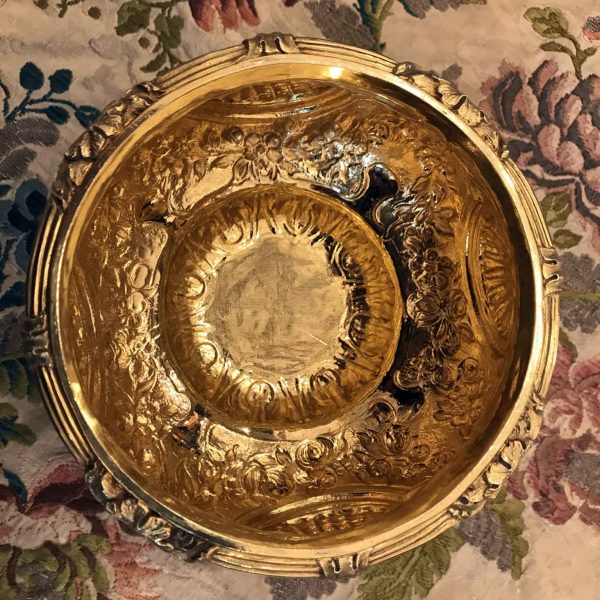 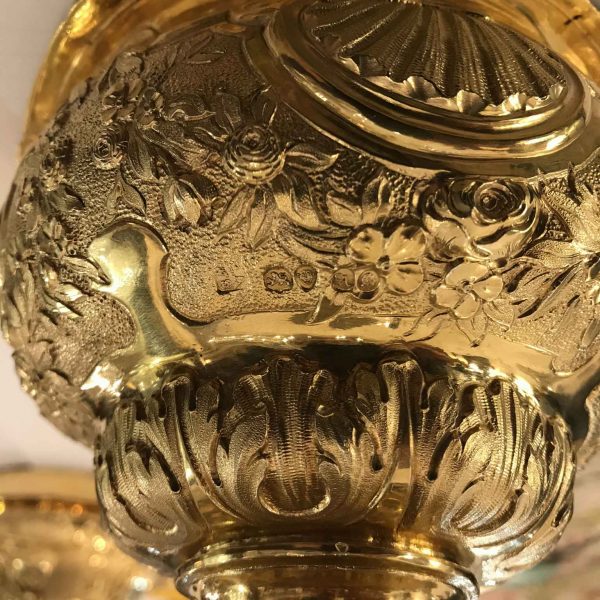 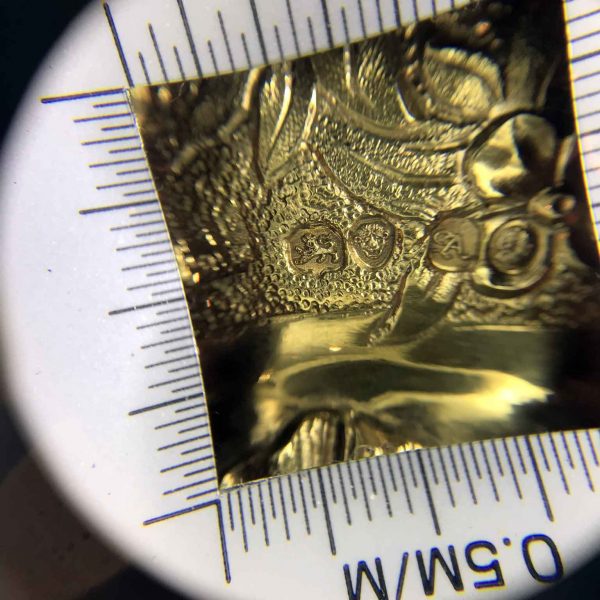 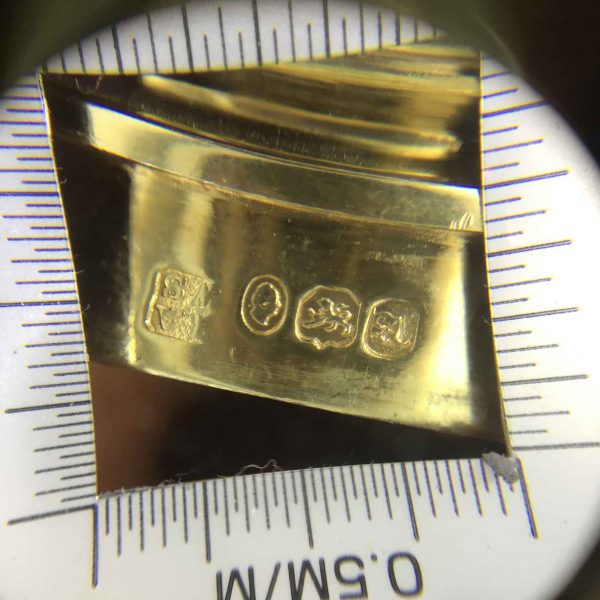 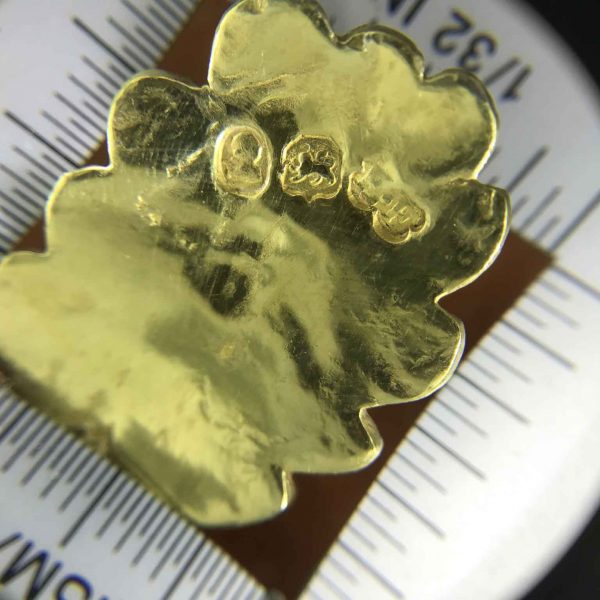 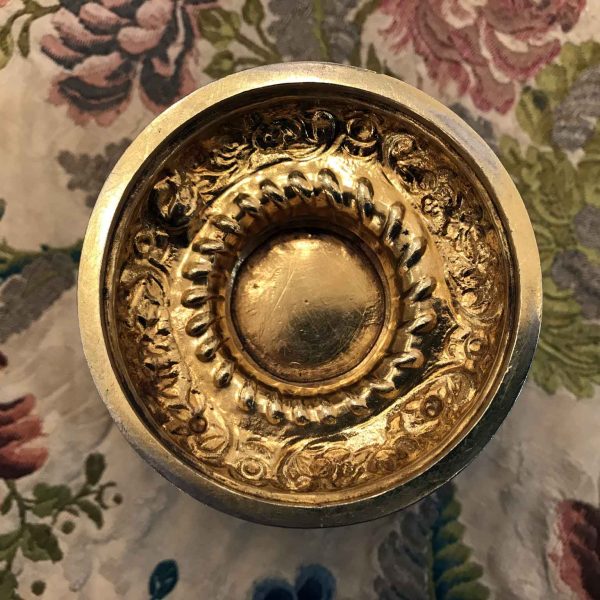 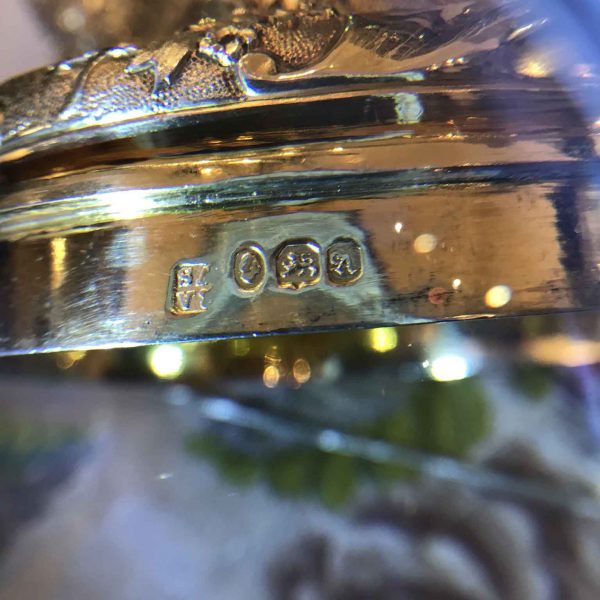 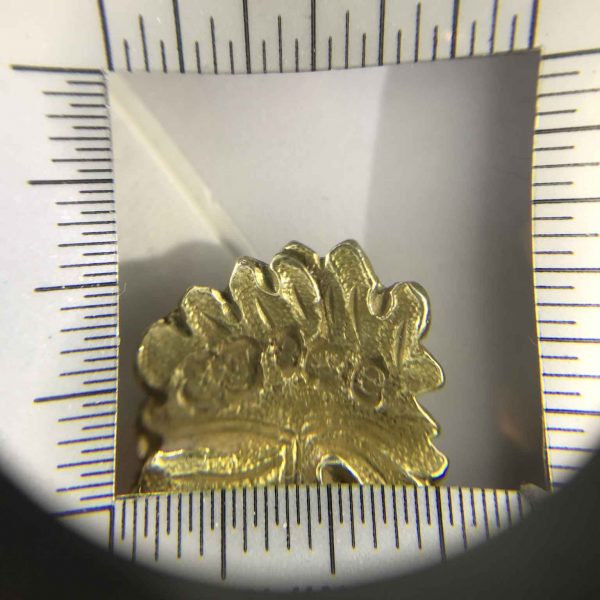 This antique  sugar covered vase, has a circular baluster form The cover surmounted by a cast flower finial.

The exquisite artwork  is enriched by engraved and chiseled ornamentation, a continuous alternation of shadows and lights, of smooth, shiny surfaces and matt  chiseled surfaces.

The set is cased in an elegant,  octagonal mahogany box with lid, complete with working lock and brass handle with Tho.s Allen Poynder N. 6  engraving.

Inside the lid we find the label Catchpole & Williams Silversmiths and Jewellers n. 120, Regent Street.

Thomas Henry Allen Poynder, owner of the famous Hartham Park estate, the Georgian villa in Wiltshire, England, near Corsham, from which the artifact supposedly originates.

The set comes from a private collection in Milan and is in good condition; we just repaired the lock of the mahogany case, made the key, repaired some veneer detachments and  polished the case.

The numbering engraved on the case may suggest that this set was aligned with teapots, coffee makers or tea caddies with which these elaborate accessories were generally created together.

Edward Farrell registered his first mark in London, 1813.  Silversmith and retailer for the Duke of York, Farrell experimented unusual designs after the Renaissance and Baroque, as well as in the most popular Rococo revival. The remarkable silver gilt candelabrum displayed at the Victoria and Albert Museum and featuring Neptune riding a seahorse is a significant example of Farrell’s creativity and skills. It was part of a large scale garniture ordered by the Duke of York probably around 1819.

19th Century Venetian Oval Silver Tray, 19th Century Victorian Silver Inkstand Sheffield 1897 Harry Wright Atkin, Gift Ideas
19th Century Italian Neoclassical Silver Covered Compote with Crystal Bowl
19th Century Italian Silver and Crystal Compote Bowl in good condition from a Milanese private collection. This antique Neoclassical covered compote bowl has a very fine hand-chased vegetal decoration and engraving, a lovely cast engraved silver 800/000 finial and shows silver-maker’s mark for Cristoforo Corbella active in the first half of 19th century in Milan, contrada degli Orefici 3194. This antique silver compote of supreme craftsmanship stands on a three-lobed pedestal base with B L monogram engraved in the central part, features tripod legs decorated with Neoclassical motifs, scrolls, flowers, rosettes supporting a circular upper ring adorned with elegant acanthus leafed piercing. Engraved crystal cup and a cover finely engraved with geometrical and vegetal pattern, surmounted by a cast gem finial. The following marks can be seen on the bottom of the foot and the upper edge of the compote, (the original descriptions are reported, as they appear on the documents of the State Archive of Milan): 1) Forma eptagona. Globo col Zodiaco ed i setti (sic) Trioni Heptagon form. Globe with the Zodiac and the seven Trioni (seven stars of the Ursa Major) Mark of the Guarantee Office in use in the Napoleonic Kingdom of Italy from 1812 for works with a title of 800 thousandths. 2) Aratro Plow Mark of the Guarantee Office in use in the Napoleonic Kingdom of Italy from 1812. 3) Insegna della Luna Piena, con le cifre CC  Full moon and letters CC Mark of the silversmith Cristoforo Corbella. Corbella is a renowned Milanese silver maker from the first half of the 19th century and his creations appear in the treasures of many churches and in refined private collections. Reference bibliography for marks and maker: Gianguido Sambonet, Gli argenti milanesi: maestri, botteghe e punzoni dal XIV al XIX secolo, Milano 1987, pp 181. Height: 20 cm Diameter: 14.2 cm.
1.800,00€
Add to cart 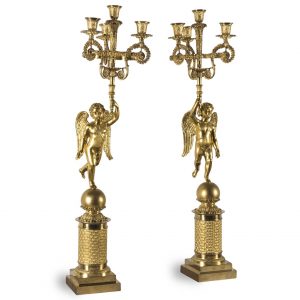 Each flambeau has four curved branches  decorated with floral patterns, ending with palm leaves and wax cups or bobéches are flower-shaped. Candle holders issuing from a torch, held by putti   balancing on a round globe. Both cherubs have a  perfect anatomy, with  curled hair and a spectacular chiseled  plumage wings. The candelabra are mounted on a stepped square base measuring 13 x 13 centimeters .

In overall excellent condition, with the exception of old restorations on a garland, an index finger and a leaf top missing.

They come from a luxury villa at Como Lake..

We have disassembled both works for cleaning  and  each item consists of 38 pieces and a globe  edge   is engraved with monogram M.B, may be initials of  the artisan maker.

Each piece is characterized by  a superb casting, chasing, engraving and mercury gilding and must be made by a great French fondeur-ciseleur of Empire period. 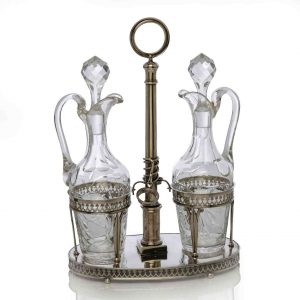