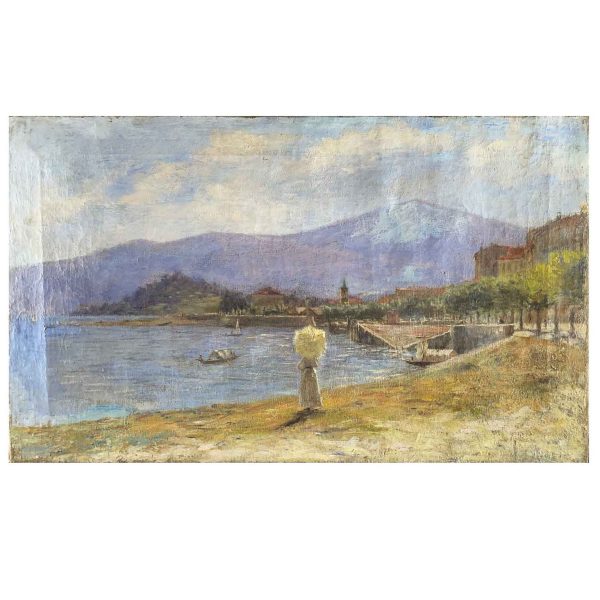 Early 20th Century Italian Mountain Landscape Oil on canvas painting depicting  a Lake Como view, notice the so-called baté, the characteristic boats of lago di Como. On the shore of the lake in the foreground, from the back, a lady with a parasol observes the view. On the left the composition shows some buildings and  a tree-lined promenade with landing on the lake.

The painting is unfraimed, dates back to the early 1900s, comes form a private Milanese collection features original wooden stretcher frame and canvas. In overall good condition except some rice paper patches on the back of the canvas.

Wishlist
Email to a friend
SKU: A1042 Categories: Landscapes, Paintings 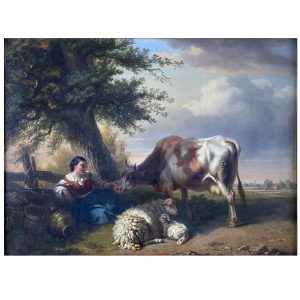 Landscapes, Paintings
Tschaggeny Flemish Landscape with Resting Shepherdess Cow and Sheep 1849
Landscape with resting shepherdess, sheep and cow, Tschaggeny 1849,  signed and dated lower right by the Flemish  Romantic painter and engraver Charles Philogene Tschaggeny,  Bruxelles 1815-1894. This antique oil on oak panel painting, set in modern carved gilt-wood frame, depicts a  resting shepherdess  seated in the shade of a tree,  stroking a cow. In front of them sits a sheep with a little lamb. The foreground scene is framed by a rural landscape with architecture in the background. In excellent condition, set within a carved and gilded wooden frame, this antique Belgian painting comes from a private collection in Milan. Charles Philogène Tschaggeny  received his training from the noted painter Eugene Verboeckhoven before leaving for Antwerp in 1836 where he worked with Nicaise de Keyzer and Henri Leys. Tschaggeny largely painted horses, studying their anatomy in detail. He was recognized as one of the best horse painters during his own lifetime. Active as Animalier Romantic painter and engraver in the Netherlands, where he won a gold medal at the Brussels Salon in 1845 and in 1846 at the Antwerp Salon, but in England too, where he moved in the years 1848-1849 . His patrons included King Wilhelm II of the Netherlands, Leopold I of Belgium and Marie-Henriette of Austria. The English Queen Victoria too, his great admirer, in 1851 bought a painting for his collection. In 1865 Tschaggeny became a member of the Royal Academy. His works can be found in the Royal museum of fine arts Brussels and The National Gallery London.
3.000,00€
Add to cart

18th Century Pair of Italian Biblical Paintings Esther before Ahasuerus, Paintings
17th Century Flemish Old Master Painting on Copper Italian Comedy Scene
17th century Old Master Flemish School oil on copper painting depicting a picturesque Scene from the Commedia dell'Arte, scenery crowded with a multitude of figures in the foreground with classical architecture and landscape in the background. On the left side, on a sort of stage with wings, in front of a portal decorated with bas-reliefs, we find a dentist working with a patient, a proclaiming gentleman and masked figures. Under the stage a multitude of characters, as we often find in Old Master Flemish paintings, street vendors, walking gentlewomen, carriages with horses, dogs and a cart pulled by a horse enrich the village scenery. The painting is of Flemish origin and is in good condition consistent with the age and is set in a modern carved and ebonised guilloché frame. Copper plate painting measures 15 x 23 cm. Listed size refer to frame size. The commedia dell’arte is a form of entertainment born in Italy in the sixteenth century, which stands out from other theatrical genres of the time for the professionalism of the actors. It remained popular until the mid-18th century, the years of Goldoni's comedy reform. It was not a theatrical genre, but a different way of producing the shows. The performances were not based on defined scripts, but on canvases, also called scenarios, which provided only indications on the action and on the jokes, comic interventions disconnected from the rest of the comedy, with the sole purpose of making people laugh, while the rest of the show was entrusted to improvisation. Another characteristic element of the commedia dell’arte is the presence of fixed characters, or characters with the same characteristics that are repeated in the different representations. Originally, the performances were held outdoors with a scenography made up of a few objects. Abroad it was known as Italian Comedy. In their spectacular formula, the comedians of the Commedia dell’Arte introduced a new and revolutionary element : the presence of women on the stage. Only at the end of the century would women take their full place in theatrical companies.
3.600,00€
Add to cart 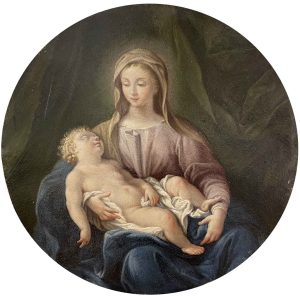 Paintings, Religious
18th Century Italian Madonna with Child Oil on Copper Girolamo Pesci
18th Century Italian Madonna with Child a Roman School oil on copper religious painting attributed to Girolamo Pesci (1684-1759) dating back to early 18th century , set in modern carved and giltwood frame. Good condition, it comes from a private Milanese property and the owner gave us the listed expertise issued by the Venetian antiques gallery when it was bought. The image reminds to the devotional works of the Maratta taste, but in this case the style leads to a follower of Francesco Trevisani and precisely to the Roman artist Girolamo Pesci (1684-1759). The copper diameter is cm. 16.5
2.200,00€
Add to cart