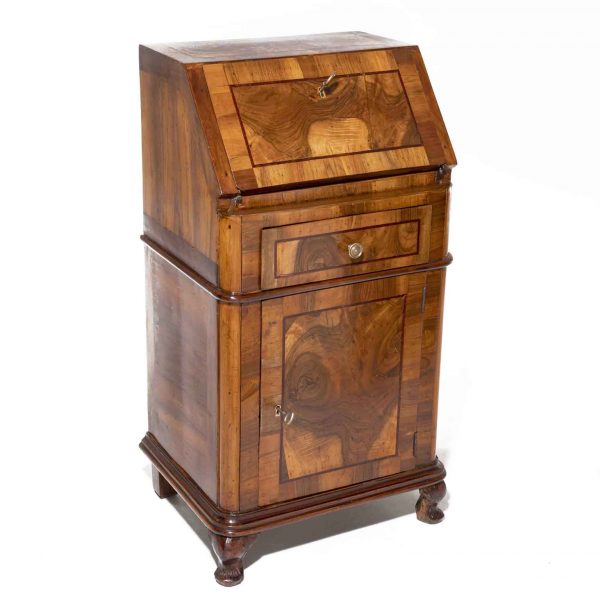 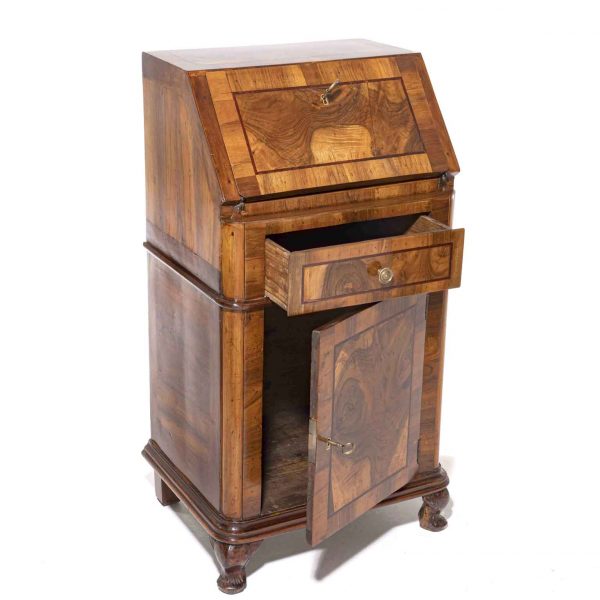 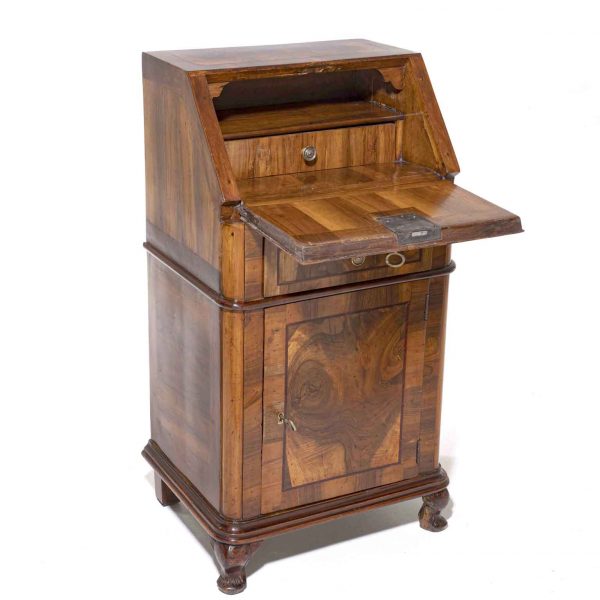 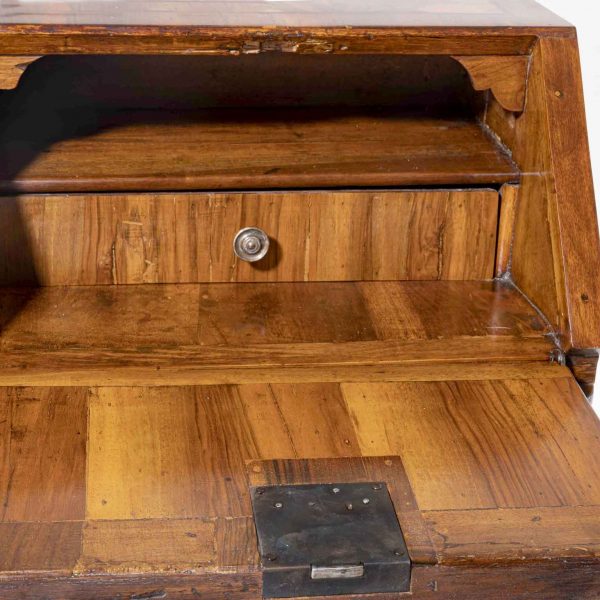 From Italy an extraordinary minimal sized burl walnut bureau, with the same size of a bedside table but it is a rare miniature Louis XV bureau with flap, of Venetian origin, dating back to late 18th century. Burl walnut veneered and inlaid bureau with flap. Front with one door and a small drawer, a fall-front opening to reveal a an interior with compartment and one drawer. It stands on curved and carved feet.
A unique piece from a private palazzo of Venice.
It showed scratches and signs of wear and use see last four listed images. we made a conservative restoration in our atelier and this rare miniature of bureau is now in good condition, with a warm wax finish, locks and keys were missing and have been replaced with new ones. 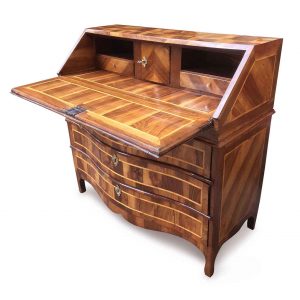 18th Century Italian Bureau Large Walnut Flap Chest of Drawers, Furniture
18th Century Italian Drop Front Bureau Burl Walnut Marquetry Secretaire
An Italian bureau with flap dating back to the second half of 18th century. A slightly curved front, three deep drawers and a fall-front opening to reveal an interior with two small drawers, compartments one small door and hiding secrets (see pictures below). This antique bureau is fully decorated with veneered and burl walnut, decorated by cherry inlays and hand-made jutting frames. It comes from a private Milanese palazzo, it was used it both as storage cabinet and writing bureau. It is in good age related condition, since restored. Measures: Height: 101 cm. Width: 107 cm. Depth: 53 cm /with open flap 76 cm.
4.500,00€
Add to cart 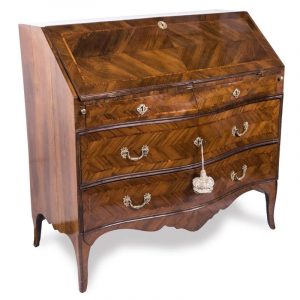 Furniture
Louis XV Genoese Walnut Veneer Fall Front Bureau Secretaire Desk
An exceptional Italian Genoese walnut veneered  and inlaid fall front bureau dating back to the second half of 18th century, of  Genoese origin. The fall opening to a fitted interior of six small drawers, pigeon holes and one central small door with an engraving. The waving front of this antique Italian cabinet shows two short, small and convex drawers above two long and deep drawers; the scalloped lower front is part of the lower drawer. The whole raised on cabriolet feet. The veneer is placed obliquely, in a herringbone pattern, within jutting frames and makes this antique Italian bureau very elegant. It comes from a private house in Milan. Wear consistent with age and use. Minor losses of veneering and defects. UNDER RESTORATION NOW:  we are going to replace missing veneer, flattening ridges of buckled, warped veneer and finishing this elegant bureau with a French polishing, a wood finishing technique that results in a very high gloss surface.
12.000,00€
Add to cart 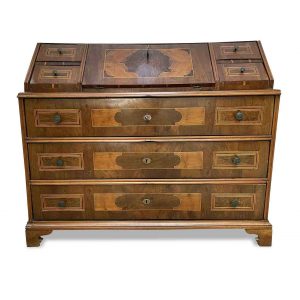 18th Century Italian Bureau Large Walnut Flap Chest of Drawers, Furniture
18th Century Italian Bureau Large Walnut Flap Chest of Drawers
A mid-18th Century Chest of Drawers with Flap a large Italian bureau with flap, coming from a private collection of Milan but it is a furnishing whose origin is Trentino,  a Northern Italian region closed to Austrian mountain border. This Italian walnut bureau with flap dates back to the half of 18th century, shows three deep drawers and a fall-front opening to reveal an interior with four small drawers. Besides the flap, four inclined front drawers. Standing on bracket feet, this antique bureau is fully decorated with veneered and solid walnut, geometrical maple inlaid frames and beautiful cherry inlays. Great patina. It is in good age related condition, drawers run well but it shows signs of wear, veneer losses or detachments consistent with its almost three hundred years of age and use. Measures: Height: 108 cm. Width: 131 cm. Flap width only is 67. Depth: 57/with open flap 89 cm.
7.000,00€
Add to cart 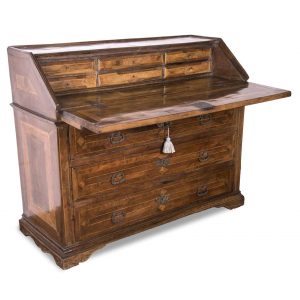 Furniture
18th century Italian walnut bureau with Flap
An Italian walnut slant front bureau desk,  dating back to the second half of 18th century. Three deep drawers and  a fall-front opening to reveal a fitted interior with six drawers and hiding  secrets  (see picture below). This antique bureau is fully decorated with veneered and solid walnut, cherry and maple frames.  It comes from a private family of Ancona,  Marche an Italian region located in the Central area of the country. It is in  good age related condition.
13.000,00€
Add to cart