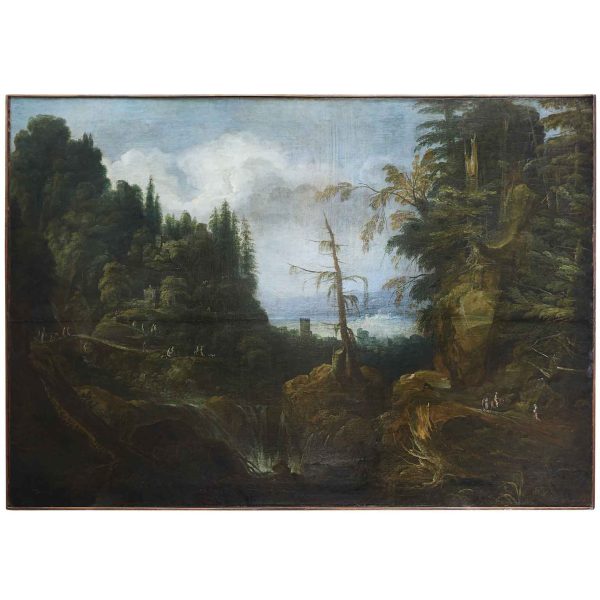 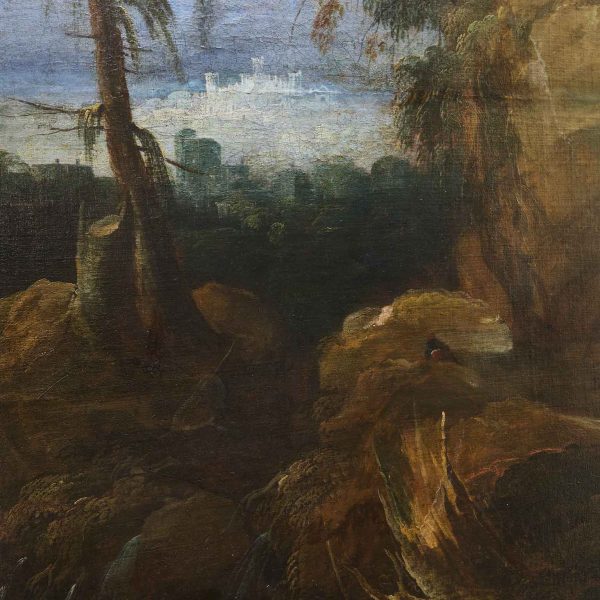 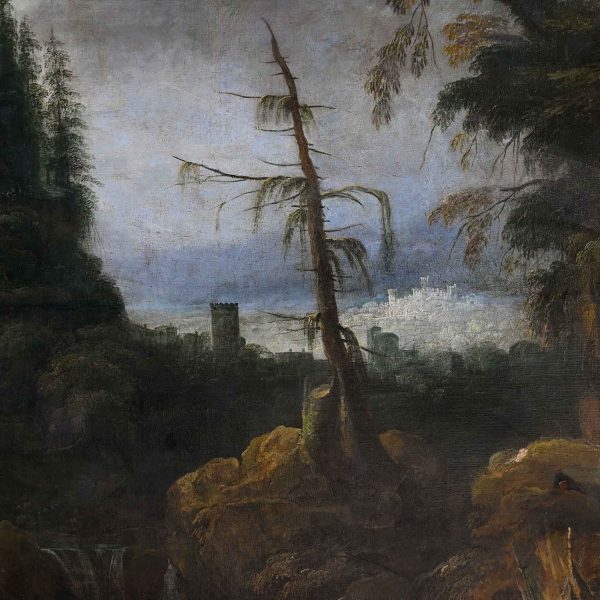 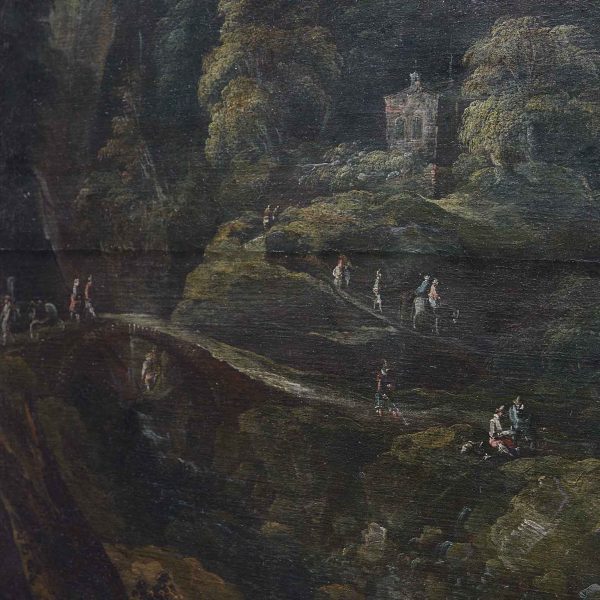 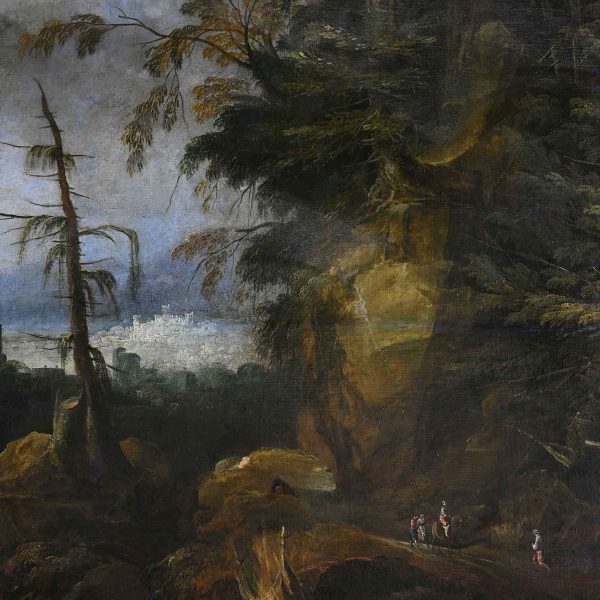 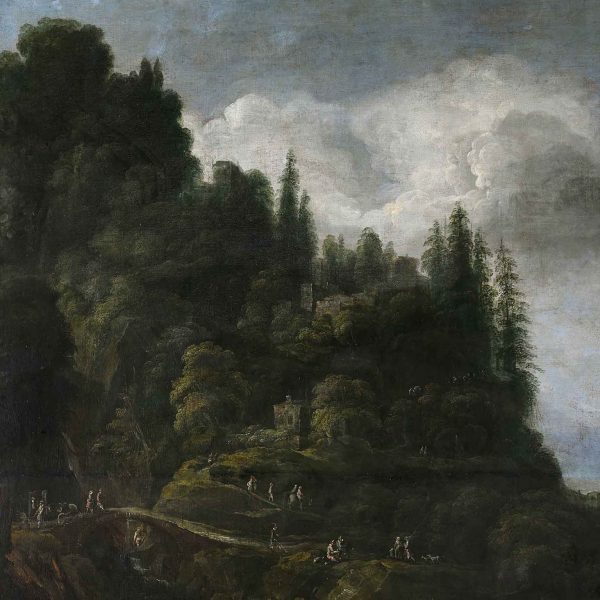 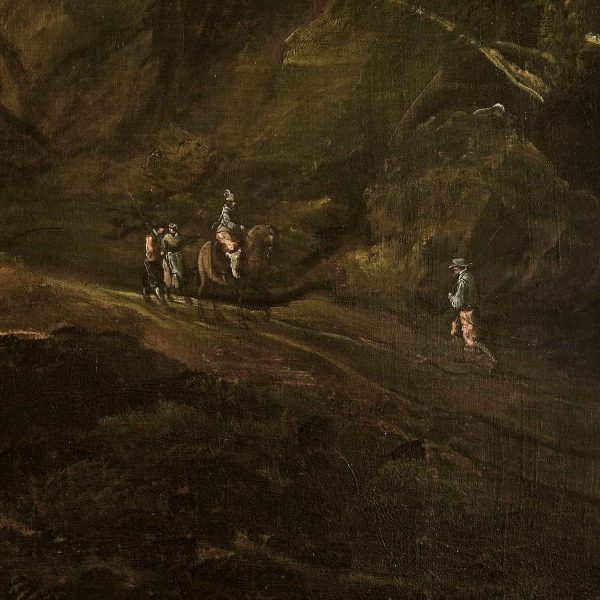 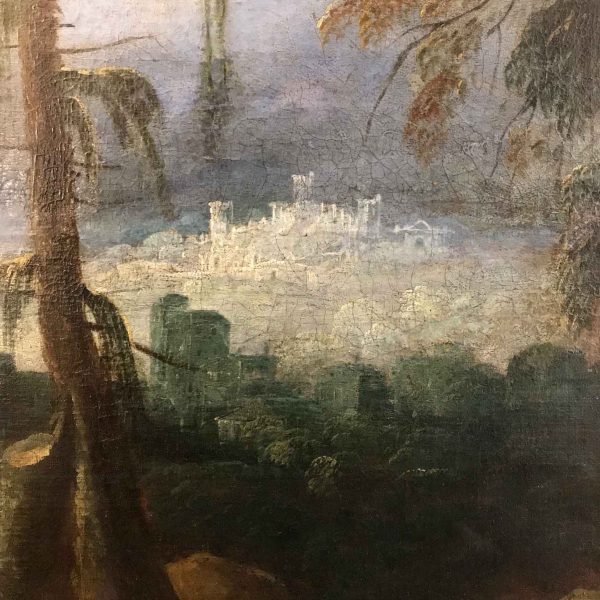 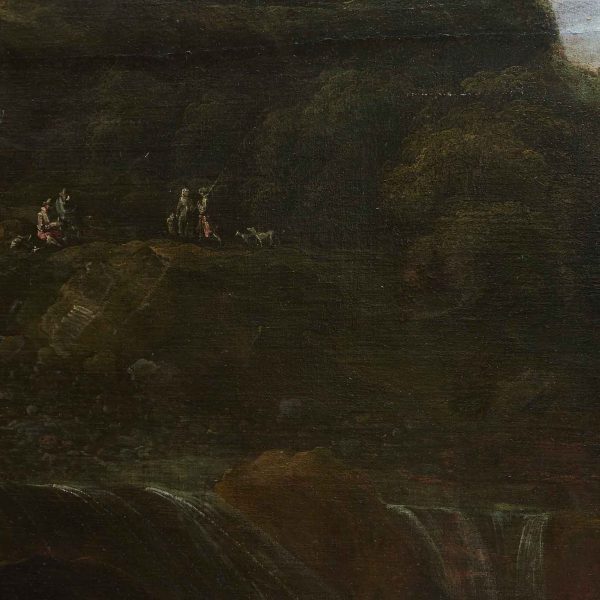 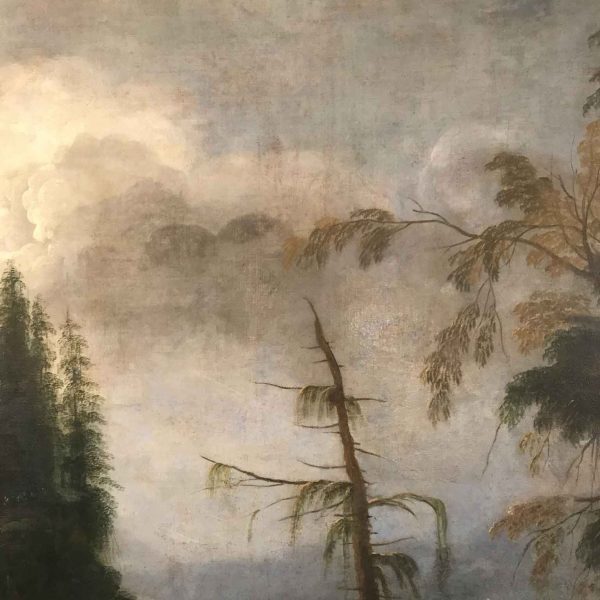 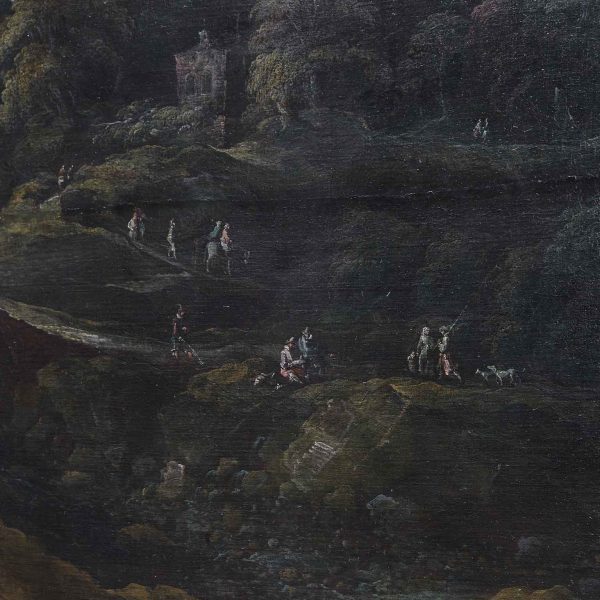 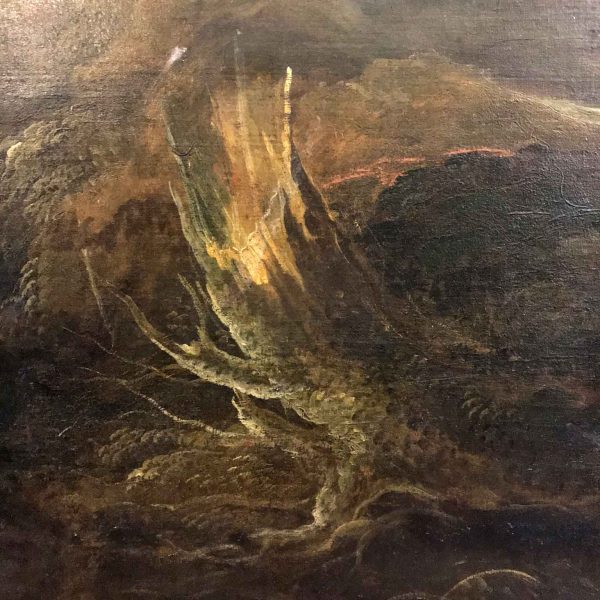 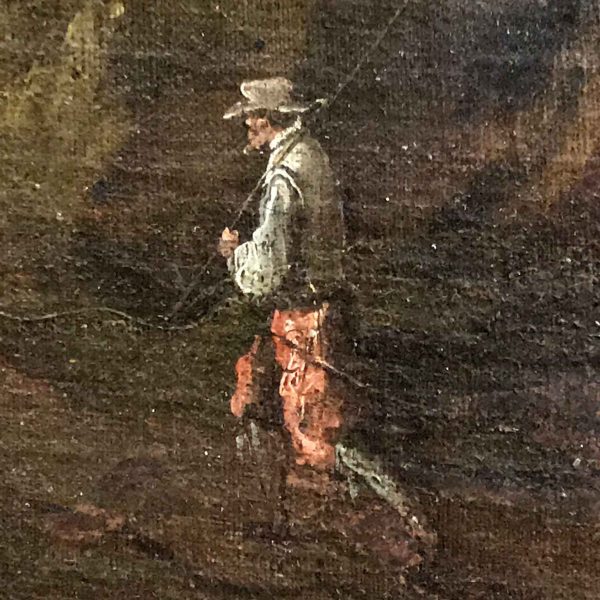 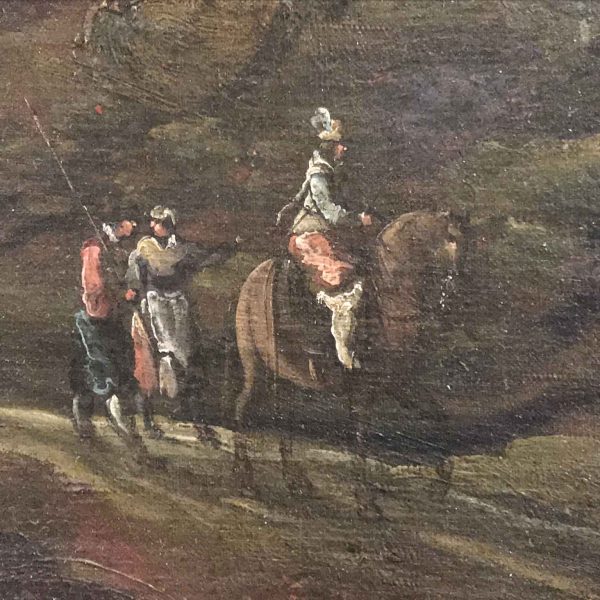 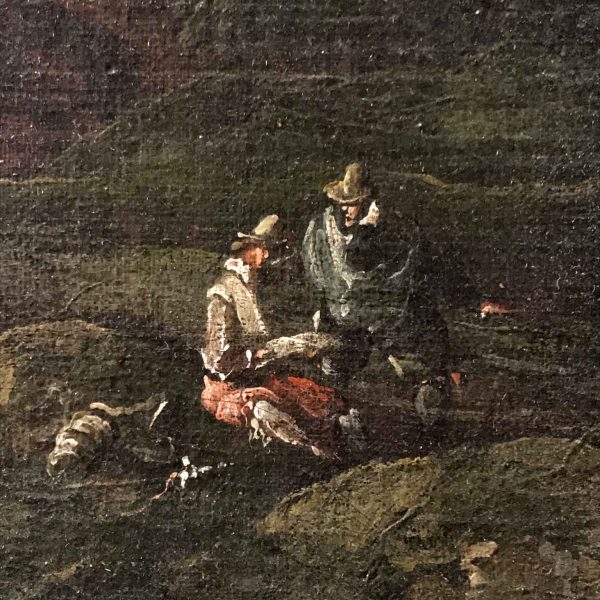 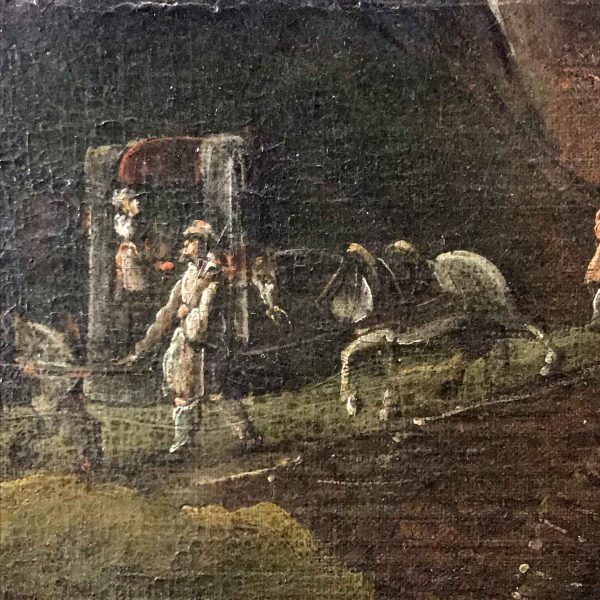 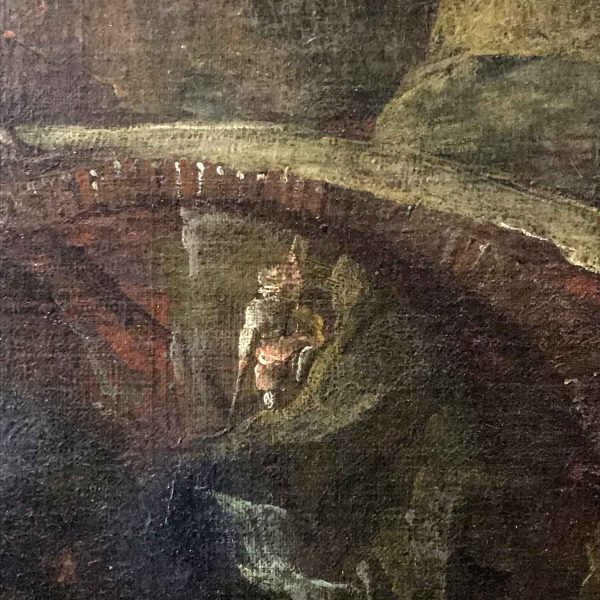 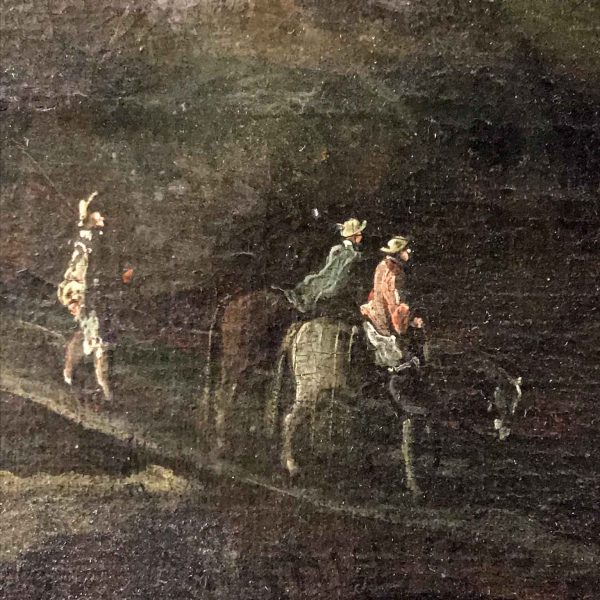 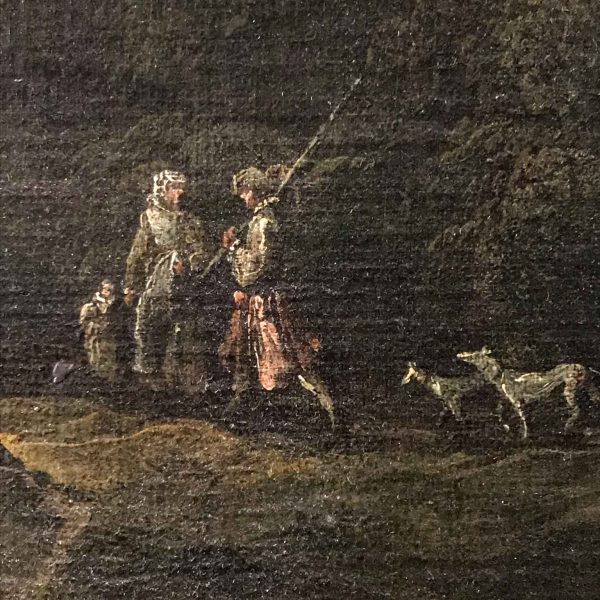 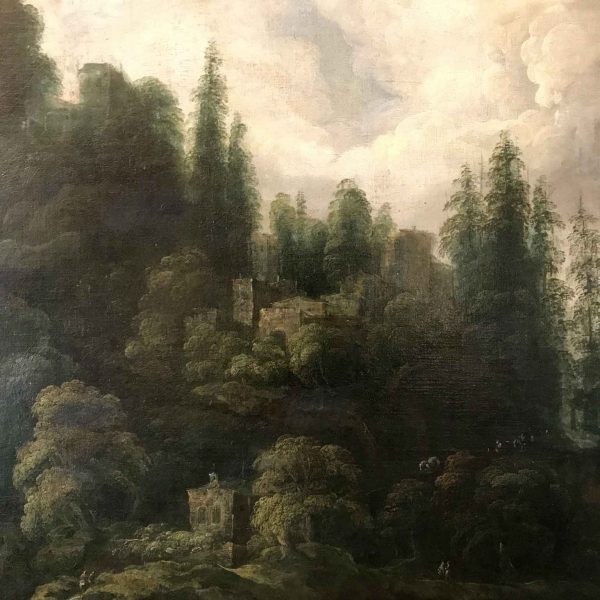 Early 18th century Italian Venetian inland painting, a large size oil on canvas Baroque mountain landscape with stream, bridge, waterfall, wayfarers and a village in the background. The woodland is animated by figures, a caravan with horsemen fishermen. This monumental Italian Baroque landscape painting has a strong impact and an excellent composition balance, as it depicts in the center the luminous perspective of a fortified village, whose side wings consist of two mountain rocks with dark wooded vegetation crowded by characters, horsemen, paths, streams.

On the left side, with respect to the observer, there is a path that runs alongside a stream that flows into a waterfall in the center of the composition. from a caravan of travelers on foot and on horseback traveling along it in both directions: going up the slope on the mountainous coast you can see a church and a village near the top. The right part of the painting depicts a more sparse and dry vegetation, painted in the chromatic tones of ocher, inside of which there are dead plant, dry branches and a smaller number of figures on the rugged mountain. The iconographic inspiration of this wooded representation seems to be in the large trunk of the withered conifer in a central position, which represents a dead tree, as a? reminder of the transience of everything in life, whose phases are summarized in the two mountainous coasts. In the background a village painted in light and soft blue colors, in stark contrast to the previous scene, seems  to reassure and project us into a future season.

With a suggestive theatrical effect, more than 250 cm wide, this Baroque Italian painting comes from a private collection of Milan, the canvas has been lined and shows minor painting retouches at a horizontal seam of the canvas. It is unframed, it has just a wooden profile covering the canvas edge.

It is an antique Italian landscape, the perfect opportunity to make a statement. Get the perfect size painting for a great living room, to create that eye-catching focal point. You can make an impact with a single large work by hanging this early 18th century Italian Baroque painting of 99 inches width.

Animalier, Landscapes, Paintings
The Animals Entering Noah’s Ark 17th Century Veneto Master Painting
The Animals entering Noah’ s Ark a large size, unpublished Italian oil on canvas painting realized in the first half of 17th century by a Veneto Master. The painting, inspired by the story of the Flood contained in Genesis, depicts the gathering of animals ready to enter the ark built by Noah, according to the divine will, to preserve the righteous  man, his family and a couple of all living animals  from the punitive destruction of the flood. The biblical text offers the artist the opportunity to describe a large genre scene set in the landscape whose protagonists are animals. The adoption of a raised point of view, allows the eye to travel through the variety of the animal world, whose multitude connotes the earth and the sky, up to the  landscape, characterized by the rich foliage of trees, which lead to buildings with towers overlooking a stretch of water, up to the blue of the mountains in the background and the sky with soft pink clouds. The artist of the painting, a Veneto Master active in the first half of the 17th century, arranges both human and animal protagonists in a  simplified natural environment, in order to represent  the moltitude of the animal world,  known by contemporaries, in a usual landscape for the client, the Venetian hinterland. The descriptive intent is achieved by operating a rational organization of the figural elements, in order to govern multiplicity. The figurative result is a rich bestiary animated by  five characters. The composition of the painting is in fact dominated by imaginary representations, even fantastic ones, of animals such as unicorns, elephants, lionesses and more domestic species such as hares, lambs, horses, deer, cows and dogs. The painting dates back to 1600, of Veneto origin and comes from a Lombard private collection. Set in a 17th century wooden frame with a modern ivory color fauve marble lacquering, it is in good condition thanks to a conservative restoration, the canvas painting has been relined in the past.
Read more 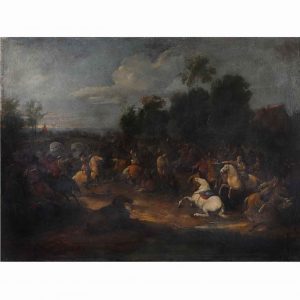 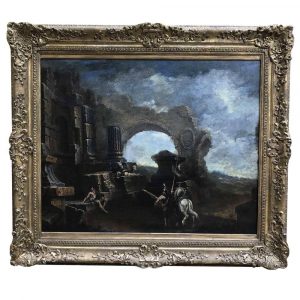 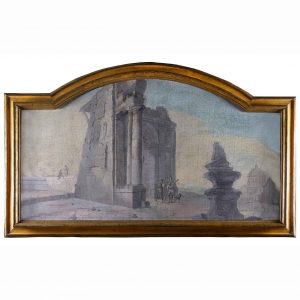 Landscapes, Paintings
Large Arched Landscape 18th Century Italian Light Blue Capriccio with Ruins Figures
Large Landscape, mid-18th century Italian Light Blue Capriccio with Ruins and Figures,  probably originally an arched overdoor oil on canvas painting, relined and mounted on its original poplar frame. In the foreground this composition with monotone delicate light blue-grey colors shows the architecture of a large ruin with three bas-relief medallions and Doric columns; in front of this ruin some figures, a woman with a baby on her shoulder, a man with a cane and a dog. On their left, the ruin of a large sculptural base and the dome of a temple in the background; on the right, a couple of figures. The landscape is painted in light blue-grey tone, it has been restored and has widespread retouching, in many areas you can see the texture of the canvas as a presumed effect of a radical cleaning of the pigments. This effect, which we could define as worn, makes a surreal, almost metaphysical painting atmosphere. The frame is antique,  has an original silver-leaf finish in the relief molding parts, whereas the central part of the frame is lacquered in Sienese ocher yellow. Both Painting and frame dates back to the mid-1700s.
5.000,00€
Read more