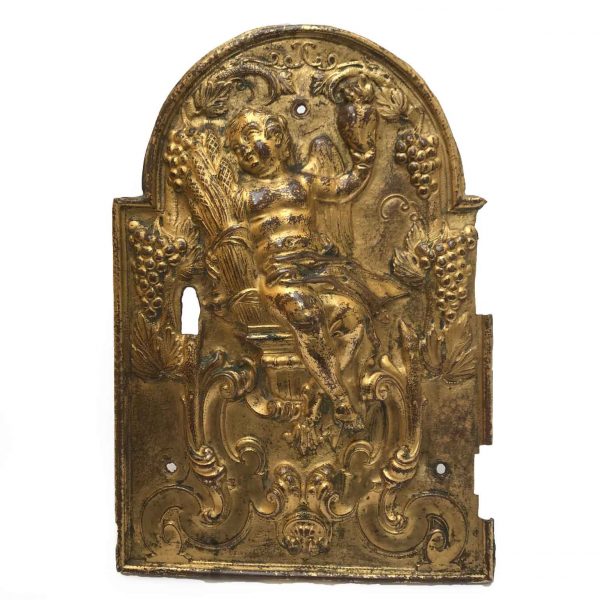 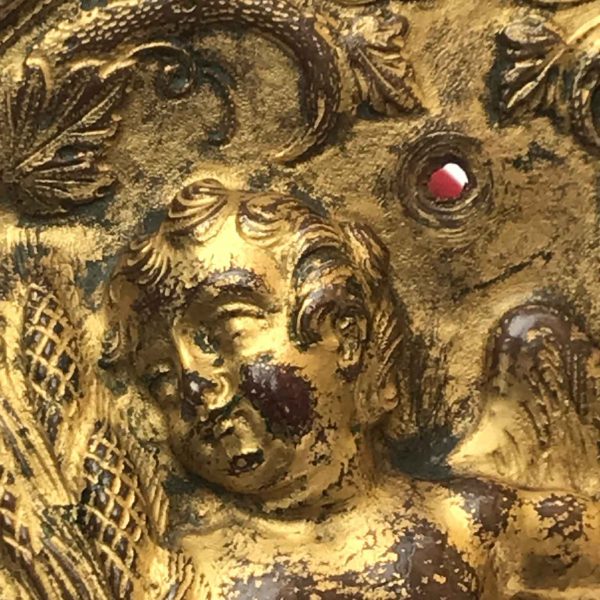 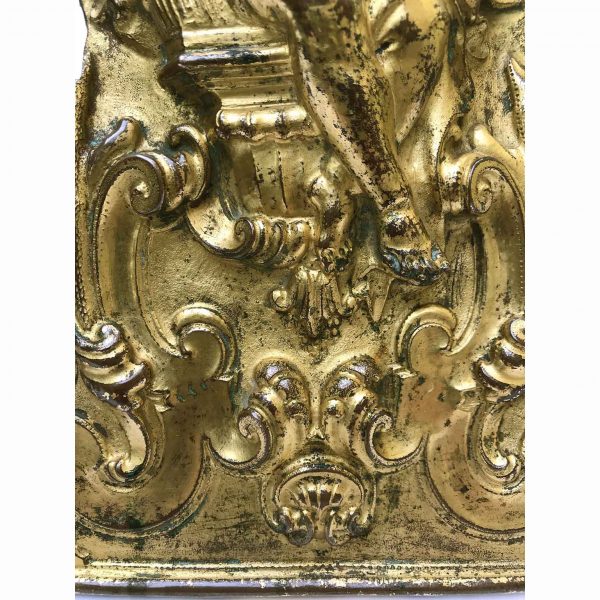 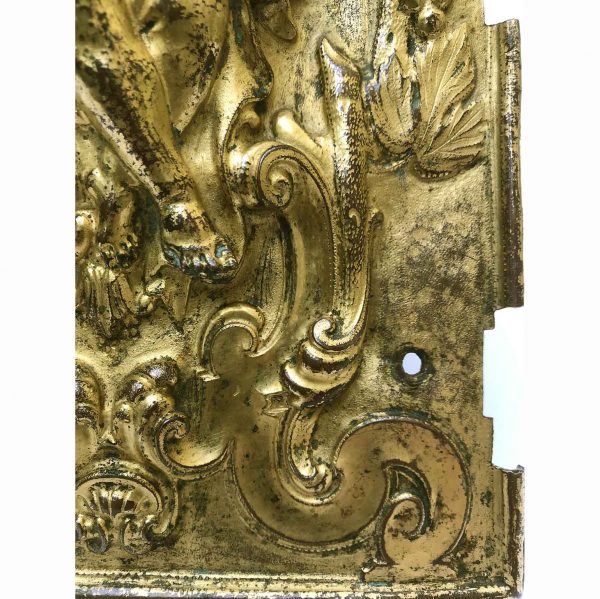 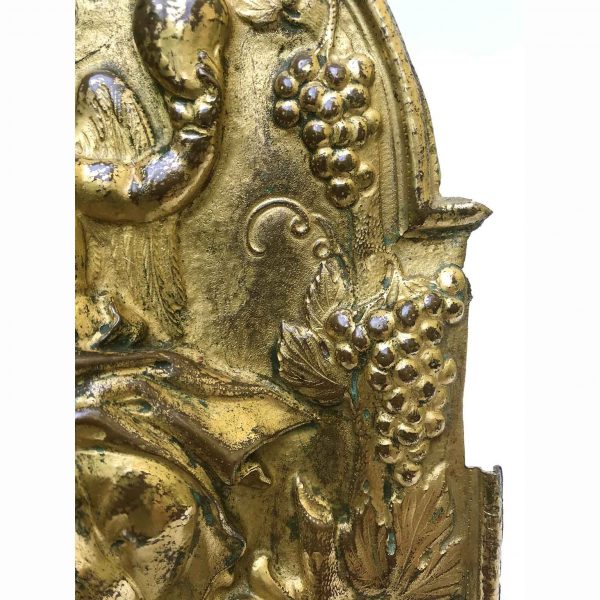 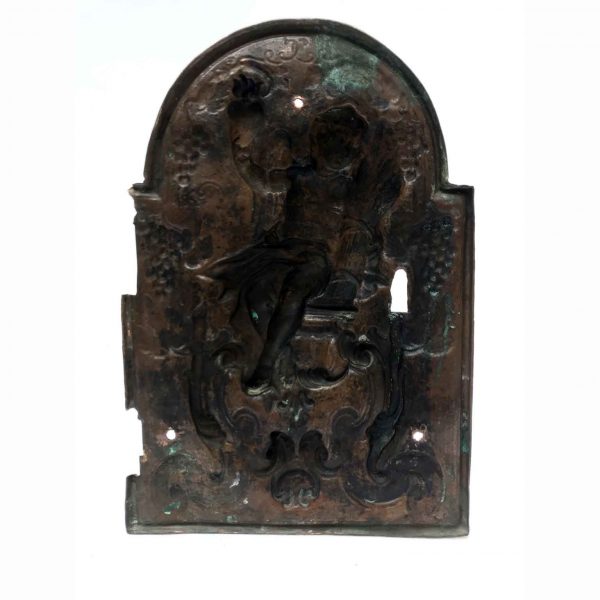 Antique embossed, repoussé gilt copper door from an Italian tabernacle of Rome, a Baroque liturgical decoration dating back to mid- 18th century. This antique Italian work is fully hand-made, has a spectacular original gilding with minor losses, traces of age and use.
This exquisite arched gilded tabernacle door of Roman origin, dating back to 1750 circa is in good age related condition. Repoussé with an angel seated on a bracket, holding a heart in his hand surrounded by scrolls, grape bunches, vine leaves and ears of wheat, all religious symbols of the Eucharist, but also representing good wishes, wealth, abundance and fecundity.

A wonderful deep embossment and an extraordinary original gilding with some wear parts consistent with age and use. The door has three holes by which it was fixed to the wooden support, bears the hole for the lock on the left and the notches on the right for housing the hinges which, being gilded on the edges in correspondence with the cut, are original and not later. 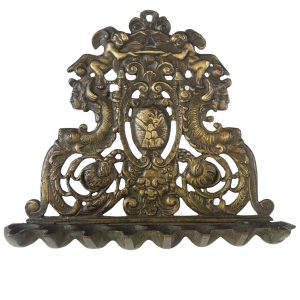 Miscellaneous
17th century Italian Cast Bronze Hanukkah Lamp Menorah
Antique cast and chased bronze Hanukkah lamp made in Italy in 17th century in good condition. This Judaica artwork is adorned with family emblem, angels and grotesque figures, consisting of a backplate and a base formed by an eight lamp tray. The backplate has been cast and chased with two grotesques  female profiles issuing from scrolling foliage and flanking a an oval coat of arms with the family arms (right now unidentified).  Below is a faun mask; above two cherubs support a Cardinal's hat over the arms. It is in good age related condition and comes from a private collection. Origin: Northern Italy. It is an antique Italian oil lamp for the Hanukkah, the Jewish Festival of Lights. It celebrates the victory of Judas Maccabeus over the Syrian king Antiochus Epiphanes and the rededication of the Temple in Jerusalem in 165 BC. This winter festival lasts eight days and an extra flame is lit for each night of the festival. For two almost identical examples, see VICTORIA AND ALBERT MUSEUM, NUMBER M.418 Jewish Ritual Art in the Victoria and Albert Museum London. THE ISRAEL MUSEUM OF JERUSALEM, Chaya Benjamin The Stieglitz Collection, Masterpieces of Jewish Art, The Israel Museum of Jerusalem, 1987, Catalogue No. 124
3.500,00€
Read more 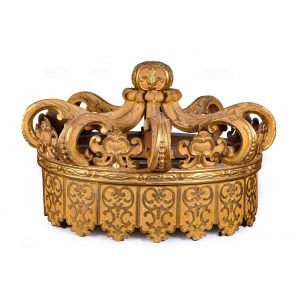 Miscellaneous
Italian Early 18th Century Louis XIV Period Giltwood Bed Canape In The Shape of An Oval Crown
A monumental and rare Italian early 18th century Louis XIV period giltwood bed canape in the shape of an oval crown. This antique, luxury bed throne corona, from which the Baldacchino canopy drape suspends over the bedstead, has an original parcel gold leaf surface and measures almost 34 inches wide, beautiful gold-leaf gilding and ocher lacquer throughout. The oval crown is supported by seven gilt scrolling arms decorated with beaded relief carving and alternating with moulded friezes. The arms are attached to a molded oval base that has flaps and lambrequin motifs. Arms are surmounted by a circular ball decorated with acanthus leaves. The interior is lined with a removable tempera painted canvas, depicting the dove of the Holy Spirit. This Italian Louis XIV baldacchino crown could be wall-mounted above the bed and magnificent drapery arrangements could hung from it. It could be hanged, we could eventually provide the top round finial with an iron eyelet for hanging it from the ceiling and it will dress up any bedroom. It comes from a private collection of a palazzo in Milan and it is in good age related condition, with signs of wear consistent with age and use. See closed up details; as most of the Italian religious furnishing, this liturgical throne crown is partially gilt, the back is finished with ocher painting only. Old worms holes have been immediately fully worm treated, holes are still to be wax filled. For a safe shipping it must be crated.
Read more 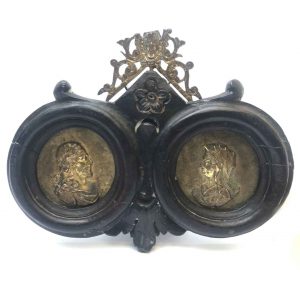 Miscellaneous
Pair Of Italian 16th Century Mannerist Gilt Bronze Medallions Jesus Christ and Mary Magdalene
Unique pair of Italian late Renaissance cast gilt bronze medallions of the late 16th century representing Jesus Christ and Mary Magdalene. The circular profiles seem to refer to the theme of mystical marriage in Judeo-Christian art. Both cast bronzes are of Mannerist inspiration and are set within a later carved and wooden frame, topped by a mounted bronze frieze with scrolls and mask. The diameter of the bronze medallion is cm. 7.2 and they date back to late 1500. Frame size: Height: 16.5 cm Width: 21.6 cm Depth: 2 cm Both Medallions are in good condition, with original beautiful gilding, the wooden frame shows minor losses and old restorations, the bronze frieze decoration shows minor losses too.
2.700,00€
Add to cart
Sold 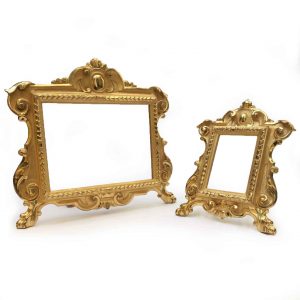 Miscellaneous
Early 19th Century Italian Louis XV style Altar Giltwood Frames
Early 19th Century Italian Louis XV style Altar Giltwood Frames, two charming antique  carved and giltwood frames, one smaller than the other, altar cards or cantagloria from Italy. Shaped, with scrolling and acanthus leaf deep carving, they are realized in cembran pinewood and have an original gold leaf gilding, dating back to early 19th century and in good age related condition, coming from a private Italian collection. Glasses have replaced lyturgical inscriptions and these antique Italian small frames are now used as decorative antique frames, they could be used as  small mirrors. In Italy these antique religious artworks have been placed on the altar only during Mass and they usually contain the prayers that the priest recites during the Mass. This antique Italian Louis XV frames will be superlative as hanging wall decorations or on a support, to adorn an antique furniture.
1.500,00€
Read more