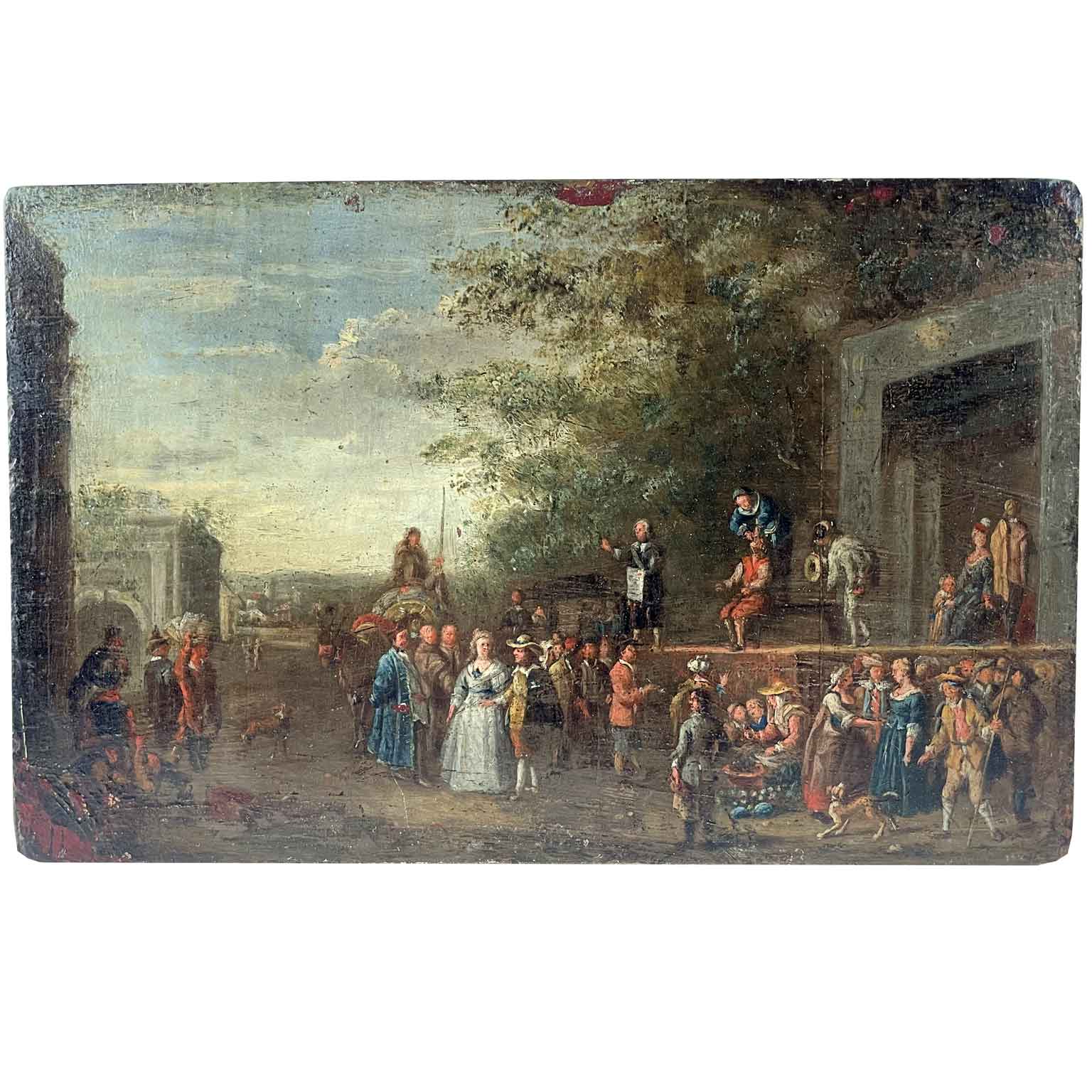 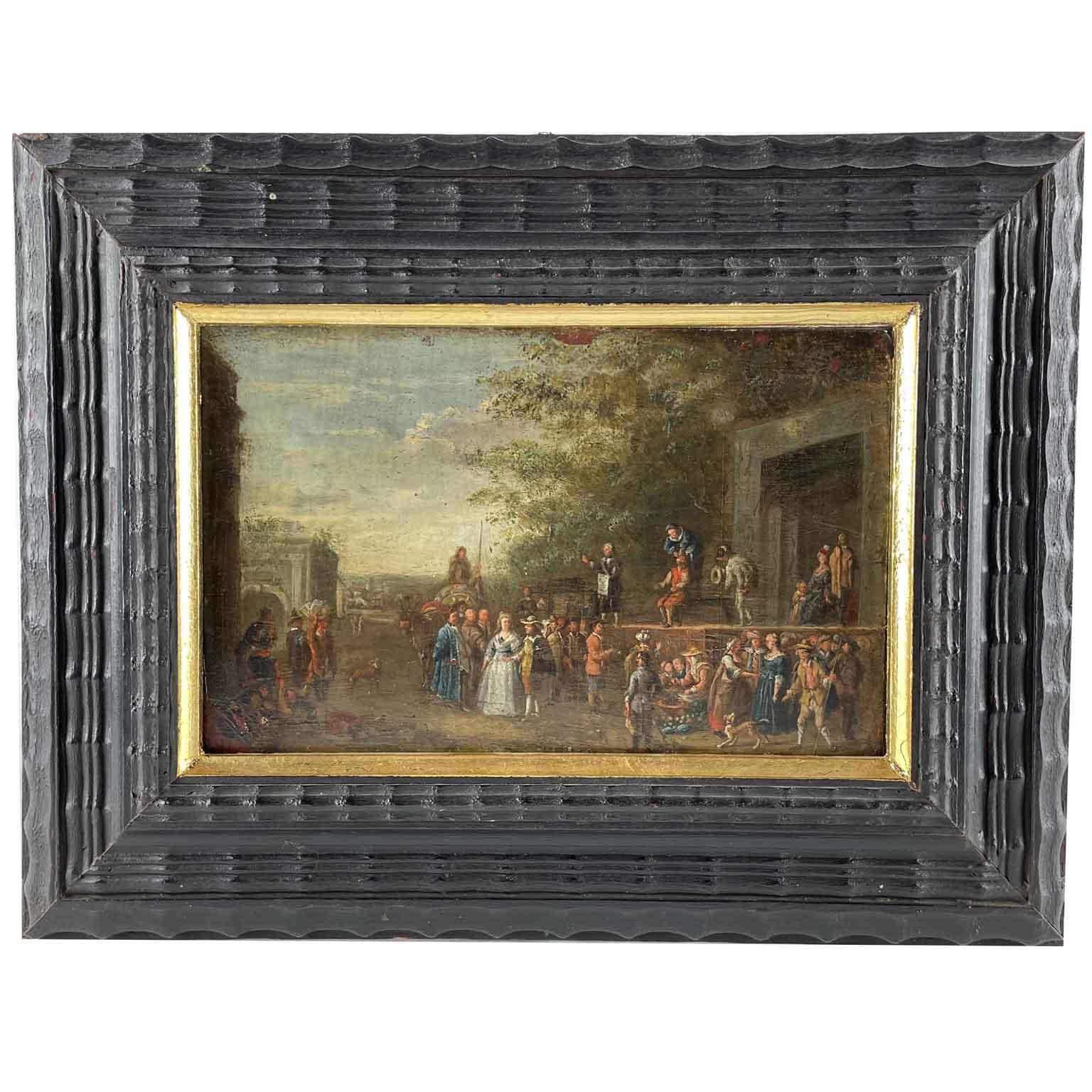 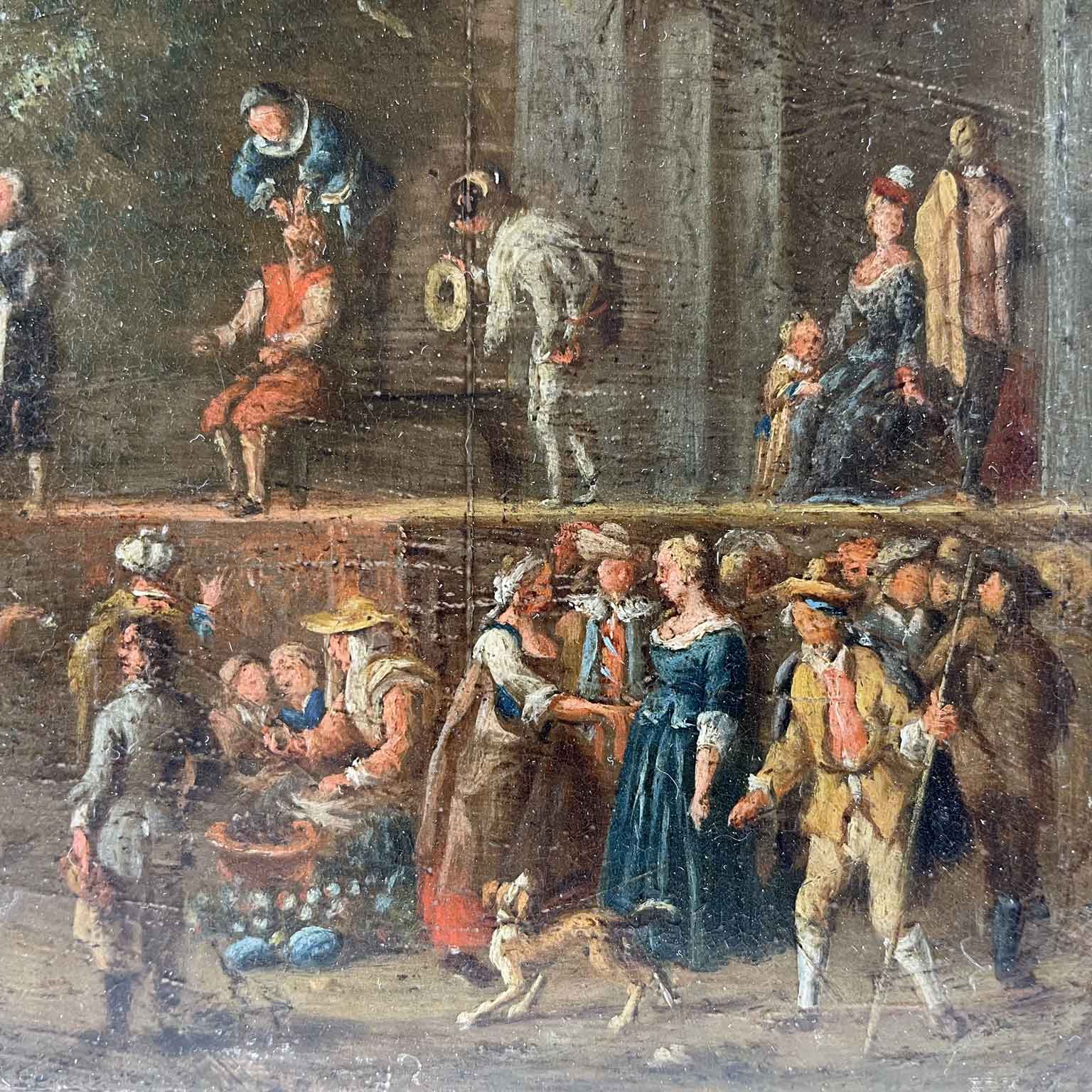 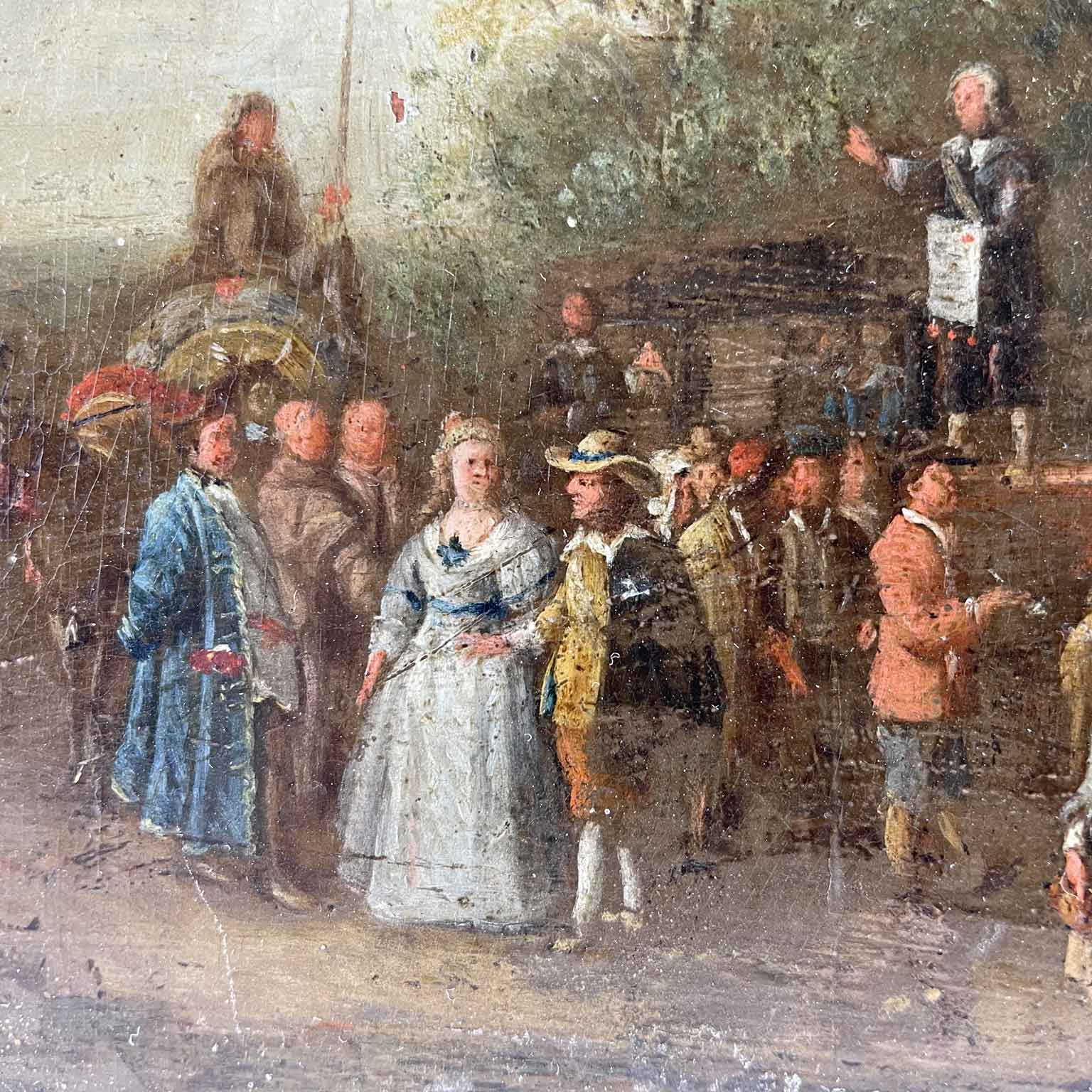 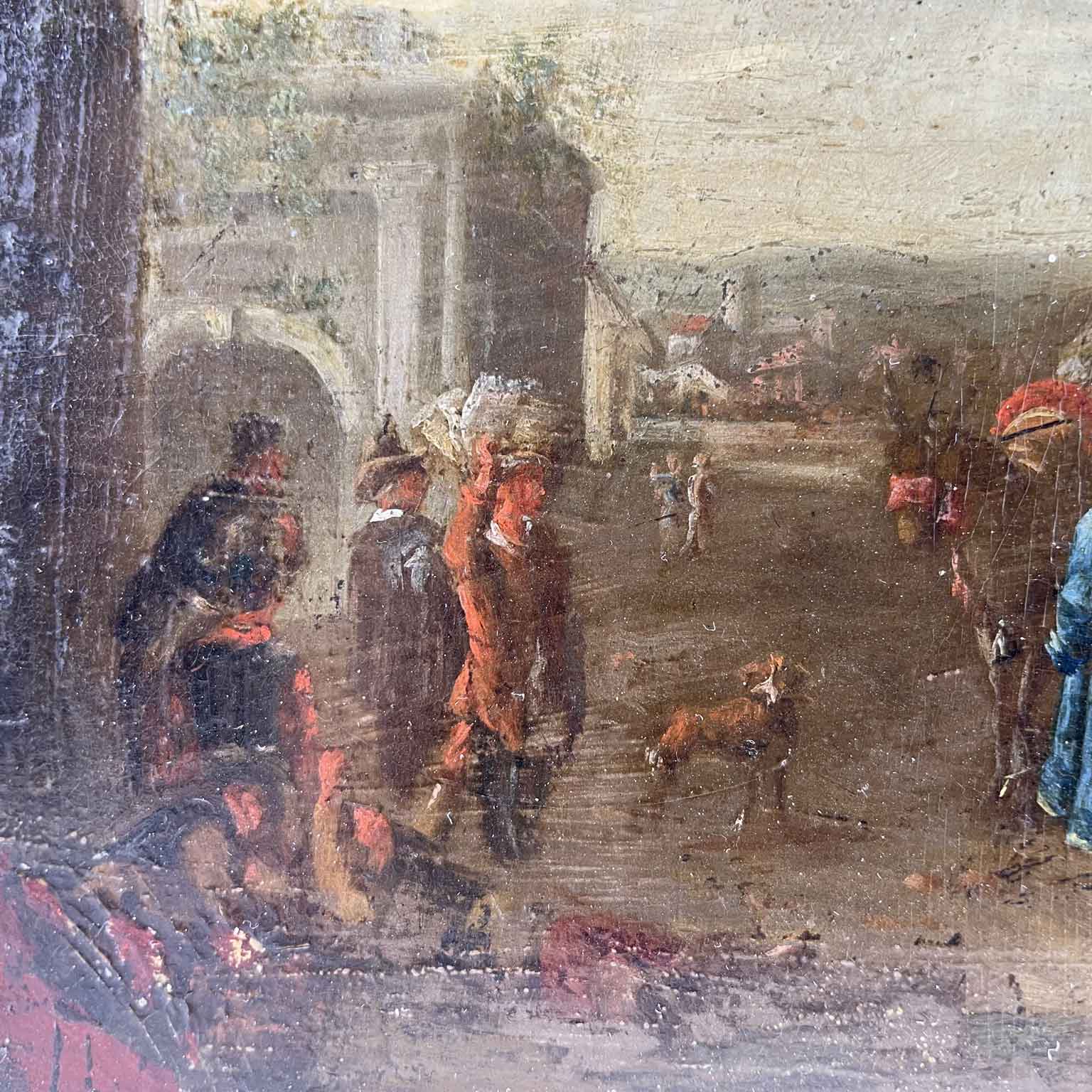 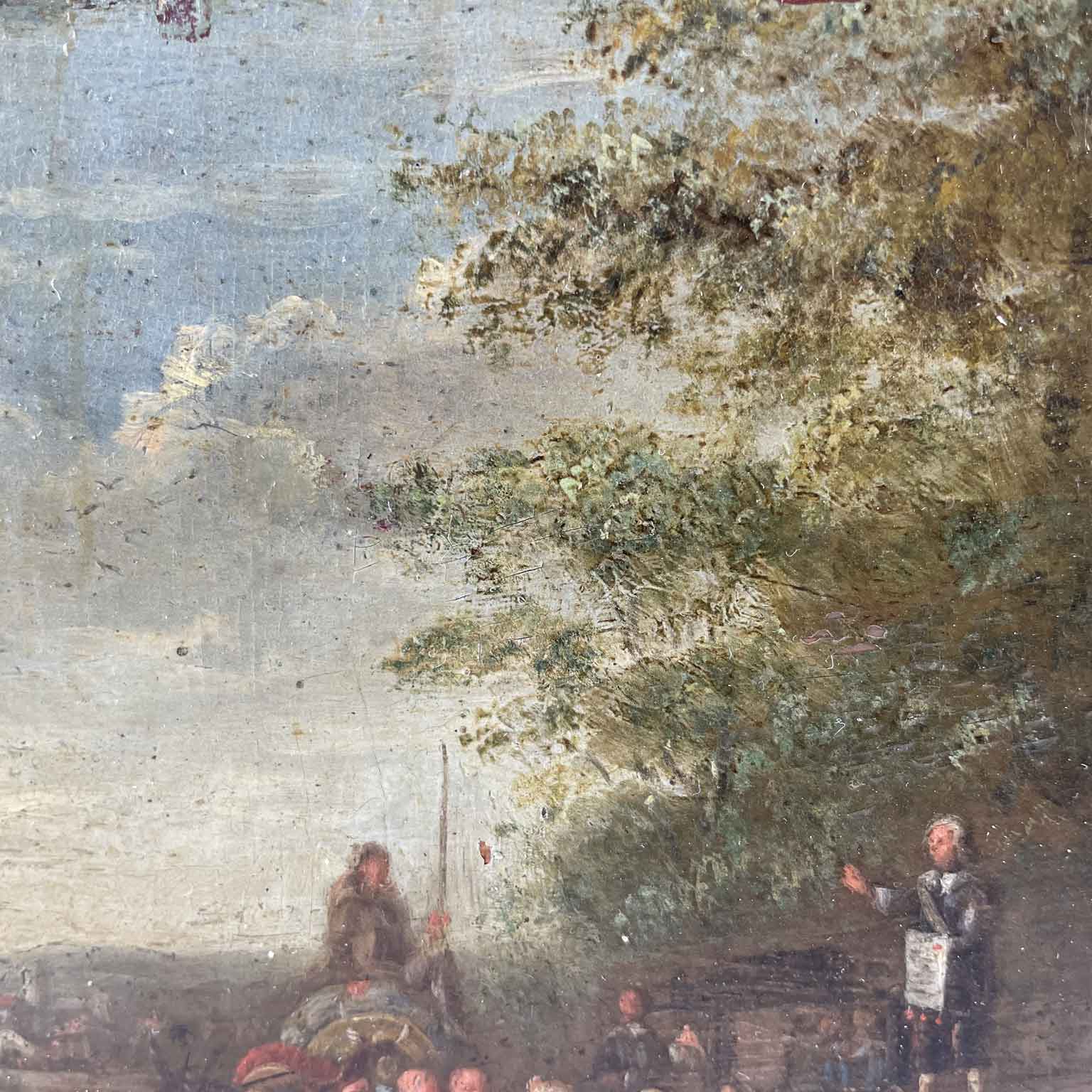 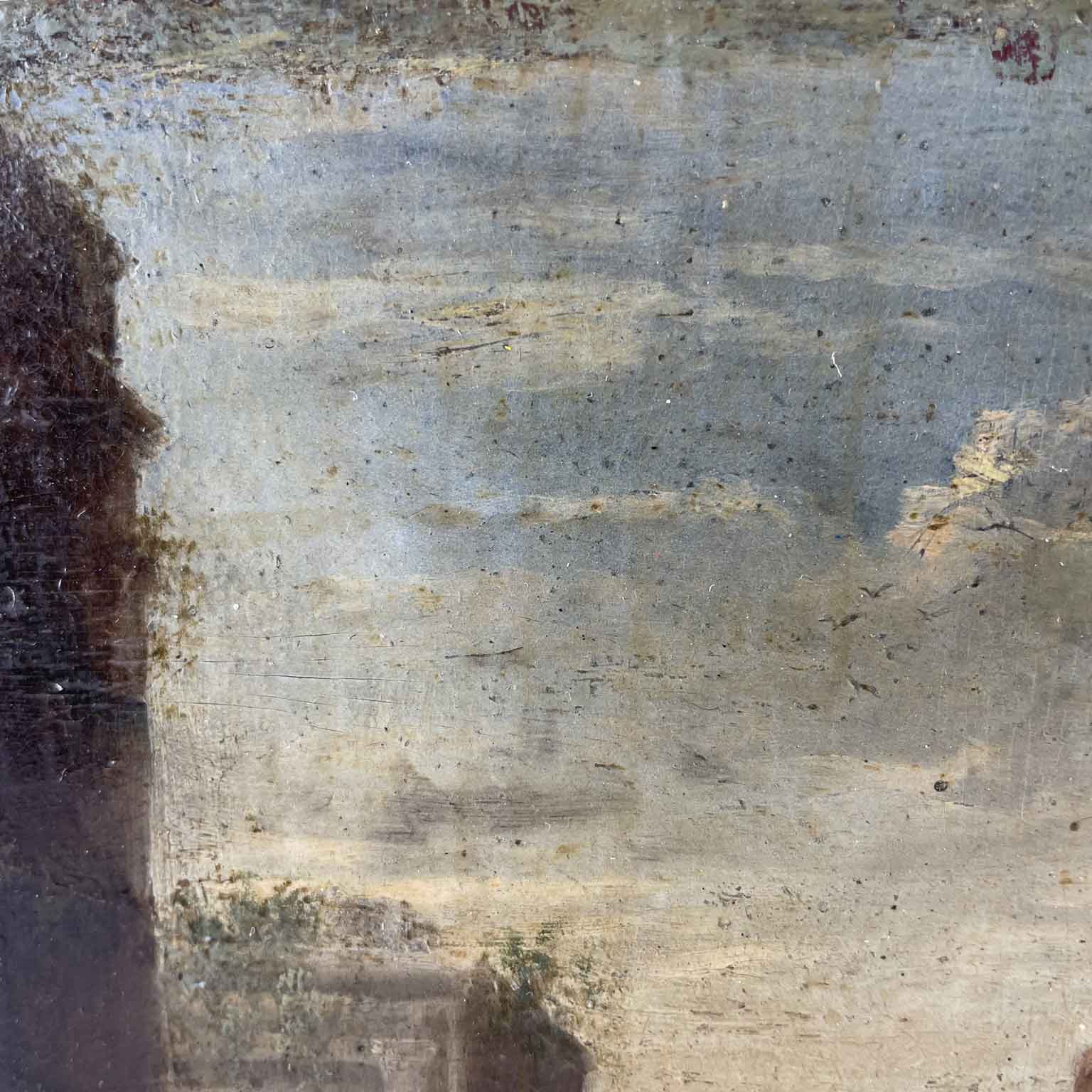 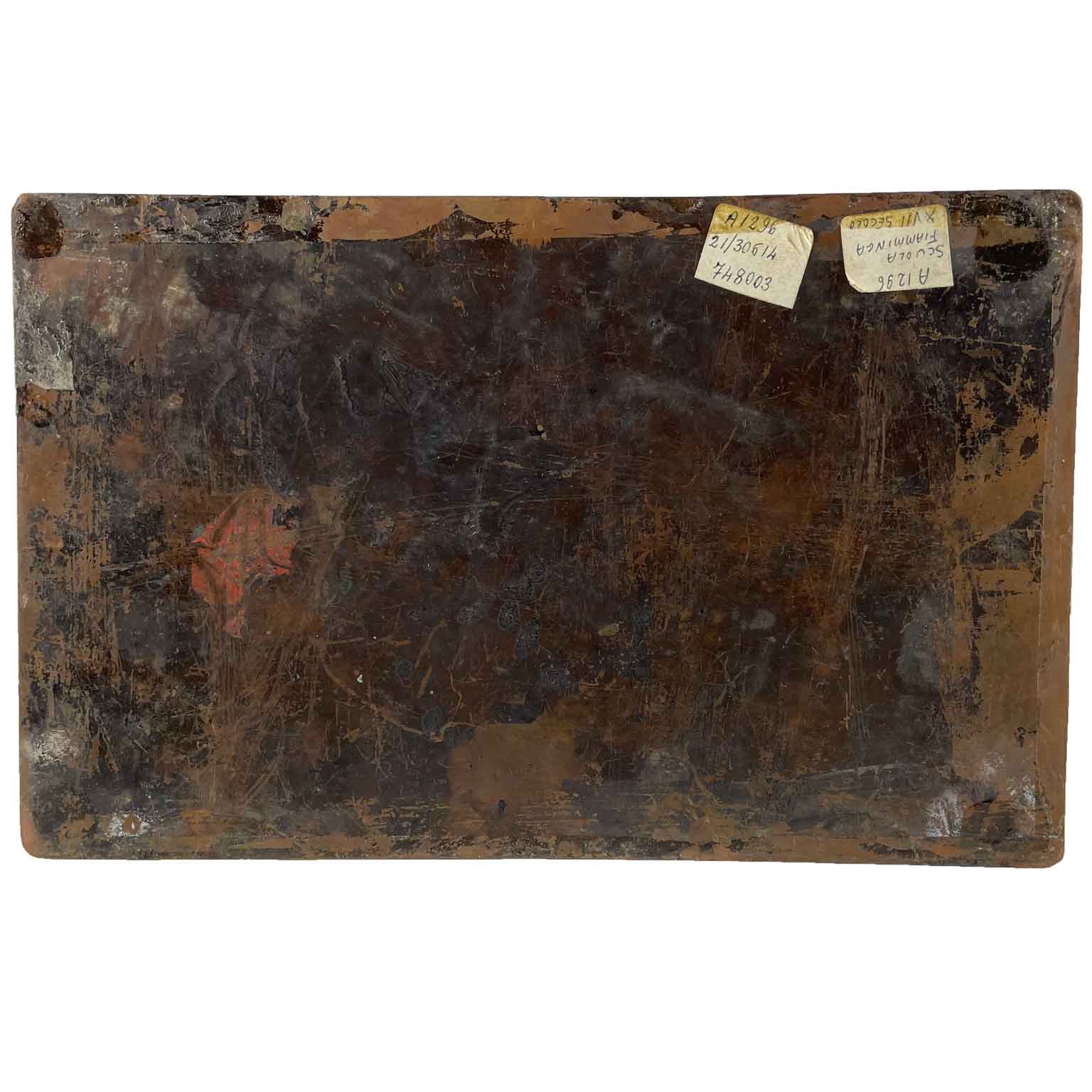 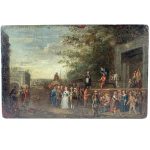 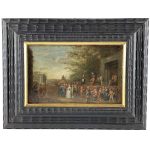 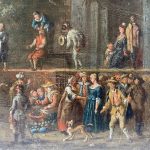 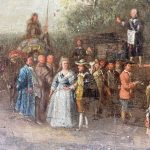 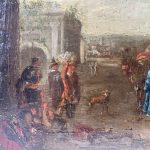 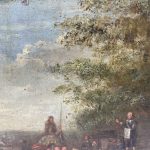 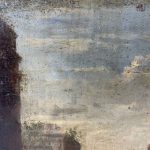 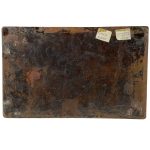 17th century Old Master Flemish School oil on copper painting depicting a picturesque Scene from the Commedia dell’Arte, scenery crowded with a multitude of figures in the foreground with classical architecture and landscape in the background. On the left side, on a sort of stage with wings, in front of a portal decorated with bas-reliefs, we find a dentist working with a patient, a proclaiming gentleman and masked figures. Under the stage a multitude of characters, as we often find in Old Master Flemish paintings, street vendors, walking gentlewomen, carriages with horses, dogs and a cart pulled by a horse enrich the village scenery. The painting is of Flemish origin and is in good condition consistent with the age and is set in a modern carved and ebonised guilloché frame. Copper plate painting measures 15 x 23 cm. Listed size refer to frame size.

The commedia dell’arte is a form of entertainment born in Italy in the sixteenth century, which stands out from other theatrical genres of the time for the professionalism of the actors. It remained popular until the mid-18th century, the years of Goldoni’s comedy reform. It was not a theatrical genre, but a different way of producing the shows. The performances were not based on defined scripts, but on canvases, also called scenarios, which provided only indications on the action and on the jokes, comic interventions disconnected from the rest of the comedy, with the sole purpose of making people laugh, while the rest of the show was entrusted to improvisation. Another characteristic element of the commedia dell’arte is the presence of fixed characters, or characters with the same characteristics that are repeated in the different representations. Originally, the performances were held outdoors with a scenography made up of a few objects. Abroad it was known as Italian Comedy. In their spectacular formula, the comedians of the Commedia dell’Arte introduced a new and revolutionary element : the presence of women on the stage. Only at the end of the century would women take their full place in theatrical companies. 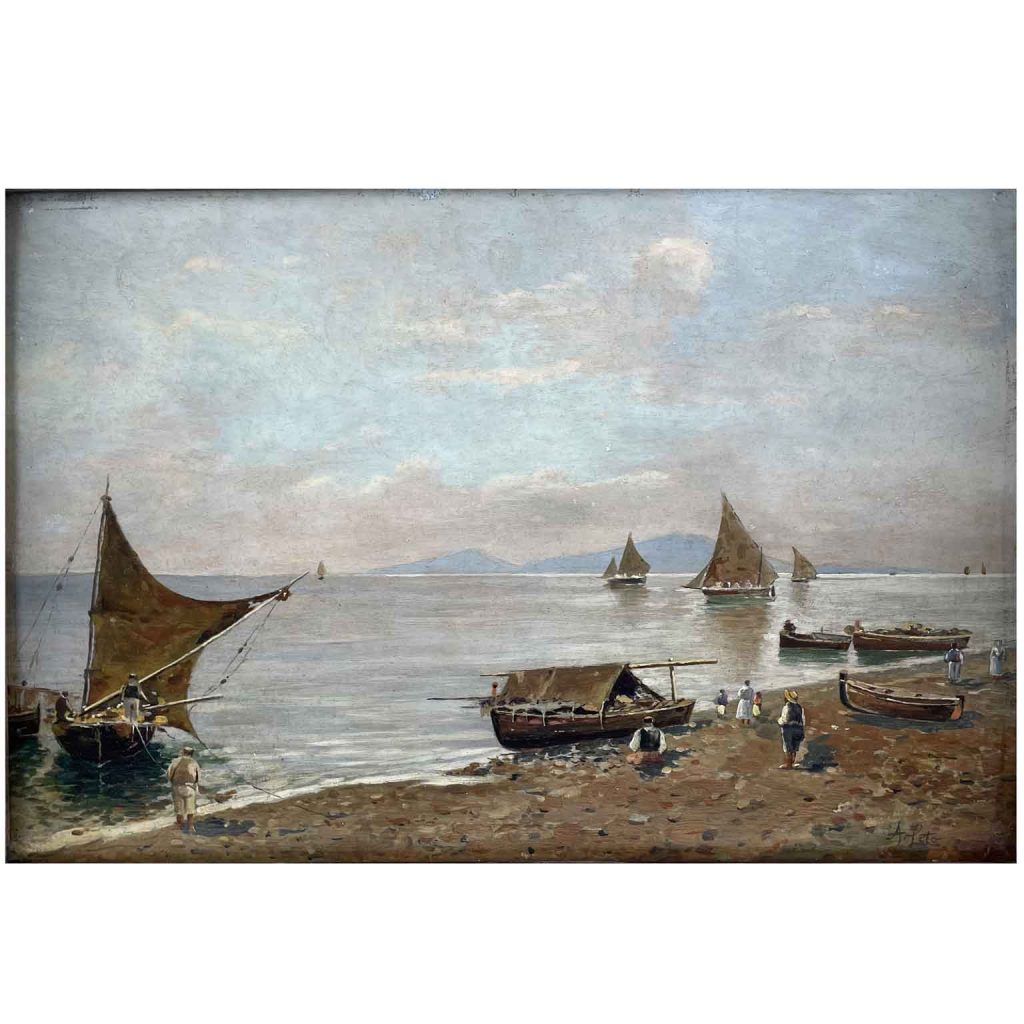 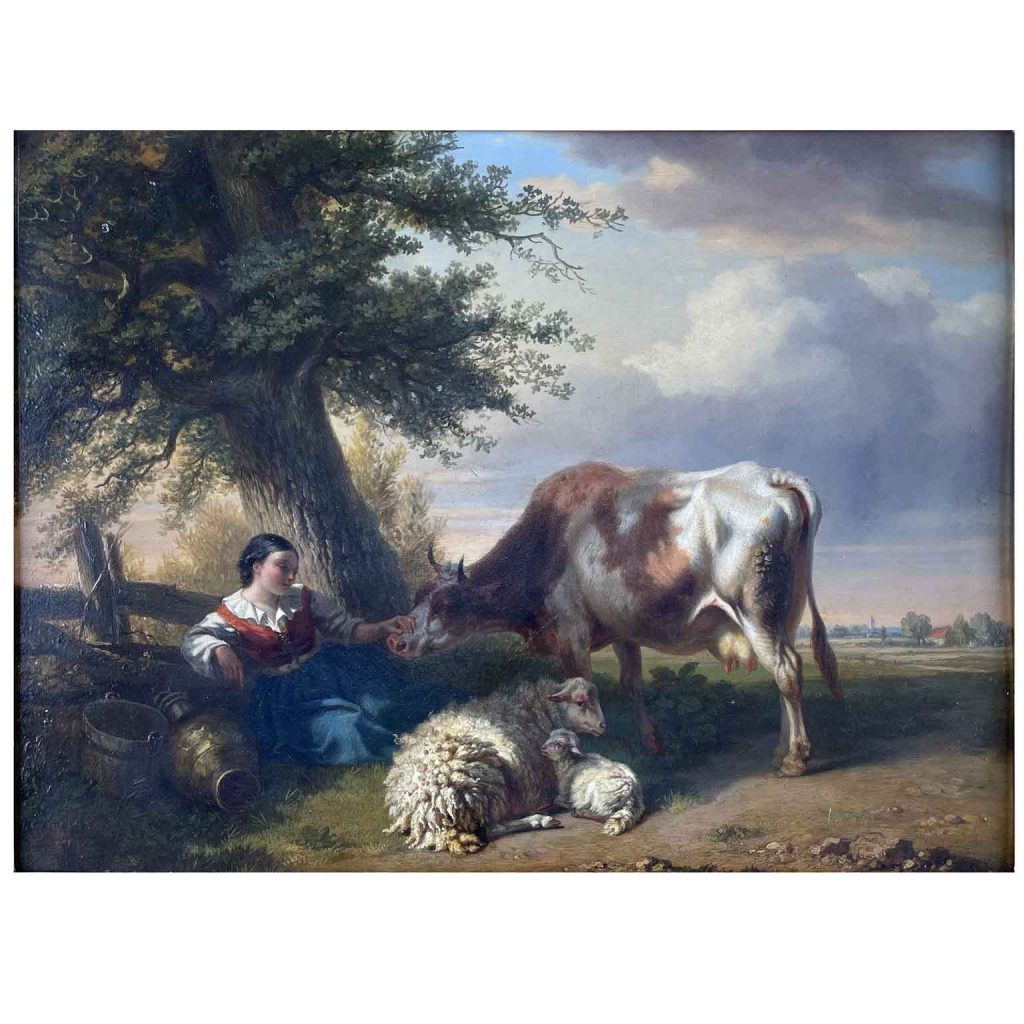 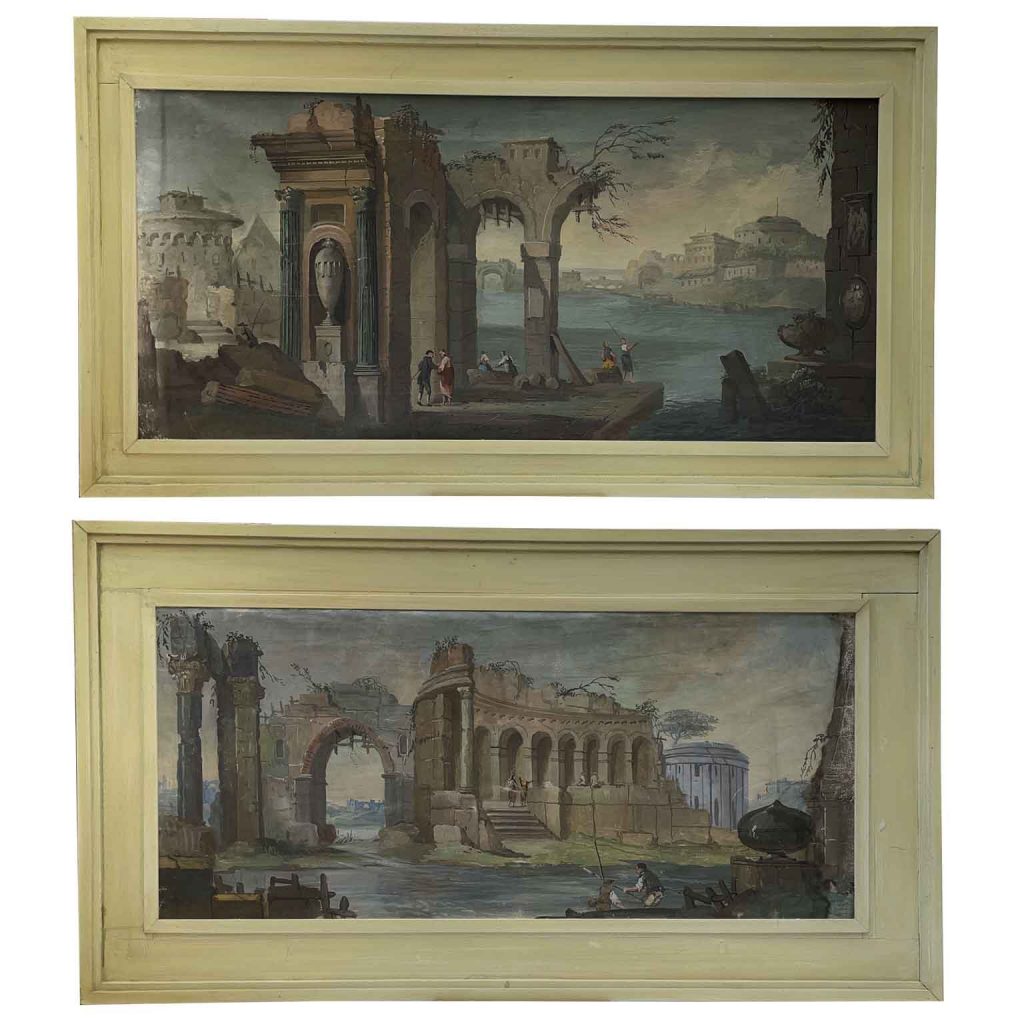